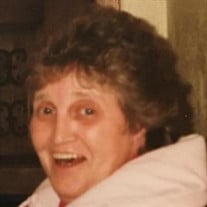 Mary Theresa Graf, 88, of Fergus Falls, MN passed away peacefully with her family at her side on September 15, 2021. Mary (Landsiedel) Graf was born August 23,1933, in Devils Lake, ND to John Henry Landsiedel II and Nora (Hall). The family was devastated when Mary’s father suddenly died when she was just 12 years old. After her father’s passing, she was raised along with her two siblings by her single mother, Nora. She received her elementary education in Devils Lake, but graduated from Parshall High School in 1951 where the family had moved to be near family after the untimely passing of her father. During her lifetime, Mary worked several waitressing jobs and later managed the Broadway Apartments with her husband, Jimmy. The two were joined in matrimony on October 15, 1955. They celebrated their 65th wedding anniversary just last year. During their marriage, Jimmy and Mary were blessed with three children. Mary took great pride in her family and kept an immaculate home. She will be remembered for her skills in the kitchen as well. She was a fabulous cook and baker. Hours were spent making baked goods and delicious meals for her family. (Many of those meals were made from the wild game or fish her sons had provided.) Her children inherited her culinary skills and are all good cooks themselves. They inherited the best traits of their mother and will remember her always. In addition to her talents in the kitchen, Mary was a wonderful story teller. She made her stories come to life with her animated retelling of family events as well as beloved children’s stories. She was also a loyal Twins fan. Although they disappointed her from time to time, she remained true to her team. Mary had a wonderful sense of humor and will be remembered for her ability to make us laugh. She was making us smile with her stories and animated facial expressions right up until the time of her passing. She told us on many occasions she had enjoyed her life “… And that’s that.” Mary led a simple life and never knew a stranger. She’d meet a person in the grocery store and before we knew it, she was exchanging a recipe. She enjoyed family trips to North Dakota to visit relatives on both sides of the family. Mary’s loving family includes: her three children and their spouses: Mark, Kevin (Pam), and Lisa, as well as her grandchildren Ben (McKenna) and Emily (Jordan); Taylor and Sam and great-granddaughter Avery. She was preceded in death by her husband James Graf, her mother and father, her beloved siblings, John and Noreen, her mother and father-in-law, aunts, uncles, and cousins. Memorials are preferred to St. Jude Children’s Research Hospital. A Memorial Service will be held for both Mary and Jimmy on Saturday, October 16, 2021 at 10:00 a.m. at Olson Funeral Home, with visitation one-hour prior to the service. Clergy: Father Alan Wielinski Interment: St. Otto’s Cemetery, Fergus Falls, MN Arrangements provided by the Olson Funeral Home in Fergus Falls. Online condolences may be sent to www.olsonfuneralhome.com

Mary Theresa Graf, 88, of Fergus Falls, MN passed away peacefully with her family at her side on September 15, 2021. Mary (Landsiedel) Graf was born August 23,1933, in Devils Lake, ND to John Henry Landsiedel II and Nora (Hall). The family... View Obituary & Service Information

The family of Mary Graf created this Life Tributes page to make it easy to share your memories.