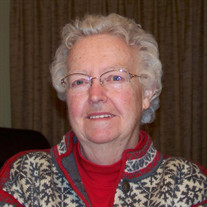 Mary Ann (Pederson) Clauson, 85, of Elk River, MN, formerly of Battle Lake, passed away Tuesday, July 21, 2020, at Guardian Angels Care Center in Elk River. Mary Ann was born May 14, 1935, in Battle Lake, MN and grew up in Vergas, MN. She was the only child of Tom Severin and Minnie Olive (Sveback) Pederson. When Mary was 18, she went to live with a family for two years in Detroit Lakes, MN. She took care of their four girls as well as cooking and cleaning. On March 22, 1958, she married Clifford Merlin Clauson in Detroit Lakes, MN. They met while she was working at the bakery in Pelican Rapids, MN. Shortly after they met, Clifford moved to Spokane, WA to work with his brother. After sometime, he said “I’m going back to Minnesota to marry that girl in the bakery.” Mary Ann and Clifford celebrated their 50th Anniversary in 2008 before Clifford passed away the following fall. Mary Ann was a homemaker and raised her children. She enjoyed gardening, both vegetables and flowers, her favorite flowers were dahlias. Every spring Mary Ann would plant 100+ dahlia bulbs, some of the blooms would be as big as a dinner plate. Then in the fall, she would dig them up and store them over the winter. Each year she would enjoy finding new ones to add to her collection, some of the bulbs were even ones her Mother had. She also enjoyed sewing, baking bread, camping, and traveling. She loved to ride her three-wheeler through the woods and fields on the farm. In the early 80’s Mary Ann and Clifford took a five-week road trip in their newly built homemade motor home. They traveled south to Texas, west to California, then up the northern coastline to Washington. They visited family and friends, and enjoyed many sites along the way before heading back to Minnesota. Preceding her in death were her husband, Clifford and her parents, Tom and Minnie Pederson. Mary Ann is survived by her children, Julie Clauson and Gary (Barbara) Clauson, and grandchildren, Emily Clauson and Sarah Clauson. A private family service will be held. Clergy: Reverend Brad Skogen Interment: Girard Union Cemetery, Henning, Minnesota Arrangements are provided by the Olson Funeral Home in Fergus Falls. Online condolences may be sent to www.olsonfuneralhome.com

The family of Mary Ann Clauson created this Life Tributes page to make it easy to share your memories.