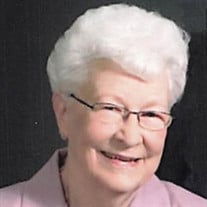 Mary Ann (Peters) Anderson, 98, of Edina, formerly of Fergus Falls, died Tuesday, August 17, 2021, at Sunrise of Edina Senior Living. Mary Ann was born May 18, 1923, in Minneapolis, MN, to Karl and Ethel (Youngren) Peters. She attended Greeley grade school, Wendell Phillips Junior High, and graduated from South High in 1941. She was elected to the National Honor Society in 1940. After high school she attended Gustavus Adolphus College from 1941-1942 and the University of Minnesota, graduating with a Bachelor of Science Degree in 1944. She earned her Master’s Degree from Moorhead State University in 1970. On August 3, 1946, she married Paul W. Anderson in Minneapolis, MN. The couple moved to Fergus Falls in 1947. Mary Ann moved to Edina in 2018 to be closer to her family. In 1944, Mary Ann started her career teaching 10-12th grade English, History and Biology in Foley, MN. In 1945, she taught English, History and Biology at Wells High School, and in 1946 taught at St. Peter High School. After moving to Fergus Falls, she taught at Fergus Falls Senior High School for one year. She was a homemaker, tutor, and substitute teacher until 1967, when she began teaching English at Underwood High School until her retirement in 1981. Mary Ann was committed to the women’s philanthropic organization P.E.O. for over 60 years. She became a member of the Fergus Falls P.E.O. Chapter BU in 1957. In 1979 she was elected to the Minnesota P.E.O. State Board and served as State President at the Minnesota State Convention in 1986. She also served P.E.O. as the State Archivist for 13 years and was chairman of the Minnesota P.E.O. Home Fund Board for five years. She was a member of the Fergus Falls Children’s Services Board. She and Paul were long-time members of Augustana Lutheran Church in Fergus Falls, where she was involved in choir, WELCA, and teaching Sunday School. She enjoyed singing in the Schumann Club sextet. Mary Ann loved to sew, needlepoint & cross-stitch. Even in her later years she continued to sew quilt pieces together for the Augustana quilters group. She and Paul loved to travel with trips to Sweden, England, Spain, Mexico, China, and throughout the US and Canada, even a couple of paddling trips in their later years to the BWCA with Steve and Karin and family. Preceding her in death were her parents, Karl and Ethel, daughter, Mary Lee Nord, and husband, Paul. Mary Ann is survived by her children, Steven (Kris) Anderson of Rosemount and Karin (Erik Scheurle) Anderson of Minneapolis, son-in law, Larry (Denise) Nord of Duluth, grandchildren, Heather Nord of Duluth, Mike Nord of St. Paul, Cody Anderson of St. Paul, and Sally (Ben) Lemke, with great grandchildren, Kip, Hattie, and Cal Lemke of Prior Lake. Memorials may be directed to Augustana Lutheran Church, 308 East Douglas Avenue, Fergus Falls, MN or to Otter Tail County Historical Museum, 1110 West Lincoln Avenue, Fergus Falls, MN. Memorial Service: 2:00 p.m. Monday, September 20, 2021 at Augustana Lutheran Church, Fergus Falls. There will be visitation one hour prior to the service at the church. Masks will be required inside church. Clergy: Pastor David Strom and Pastoral Interim Amy Kelly Burial: Will take place at a later date at Pleasant View Memorial Gardens in Burnsville, MN. Arrangements are provided with the Olson Funeral Home in Fergus Falls. Online condolences may be sent to www.olsonfuneralhome.com

The family of Mary Ann Anderson created this Life Tributes page to make it easy to share your memories.