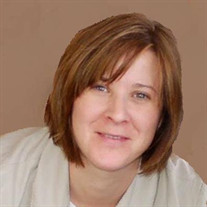 Marna Brown, 49, of Fergus Falls, passed away after a battle with cancer on Thursday, March 28, 2019, at the St. Cloud Hospital. Marna Ruth Brown was born on November 10, 1969 to Duane and Sharon (Grove) Brown in Willmar, MN. She graduated from New London-Spicer High School in 1988. Marna continued her education by obtaining a Bachelor of Arts in Elementary Education in 1992 from Augsburg College and a Masters in Social Work in 1994 from the University of Minnesota, Twin Cities. She was united in marriage to Erik Anthonisen on August 17, 1996 in Spicer, MN. Marna held many different jobs throughout her life; Flight Attendant for Northwest Airlines, Social Worker for the Faribault Public School, Peace Corp Volunteer in Nicaragua, Hospice Social Worker in Madison, WI, Office Coordinator for the Friends of the Prairie Wetlands Learning Center and Adult Basic Education teacher for the Fergus Falls Public Schools. The most satisfying job that she held was being a parent to her two children during the families moves from Madison, WI, Wahpeton, ND and then to Fergus Falls where they settled. Marna became very active in the activities in the Fergus Falls community and with her church family at The Federated Church. She enjoyed music especially playing the piano, traveling, reading and any activity that involved her family. One of the family’s favorite places to visit is Glendalough State Park just outside of Battle Lake. They spent many hours there walking the trails, kayaking and just enjoying their time in nature. Preceding her in death are her grandparents, Martin and Rosella Grove and Herbert and Louise Brown. Marna is survived by her husband, Erik Anthonisen; two children, Siri and Anders Anthonisen Brown; parents, Duane and Sharon Brown; two brothers, Eric and Kyle Brown; along with numerous aunts, uncles, cousins, nieces and nephews. Memorials preferred to establish a college fund for Siri and Anders. Visitation: 2 hours prior to the service at the church Service: 3 p.m. Friday, April 5, 2019, at The Federated Church, Fergus Falls Clergy: Reverend Doug Dent Interment: Oak Grove Cemetery, Fergus Falls Olson Funeral Home, Fergus Falls is in charge of arrangements Online condolences may be sent online at www.OlsonFuneralHome.com

Marna Brown, 49, of Fergus Falls, passed away after a battle with cancer on Thursday, March 28, 2019, at the St. Cloud Hospital. Marna Ruth Brown was born on November 10, 1969 to Duane and Sharon (Grove) Brown in Willmar, MN. She graduated... View Obituary & Service Information

The family of Marna R. Brown created this Life Tributes page to make it easy to share your memories.

Marna Brown, 49, of Fergus Falls, passed away after a battle...