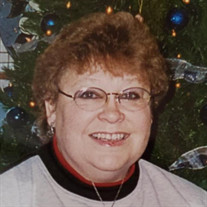 Marlys Yvonne (Hooge) Griggs, 81, of Breckenridge, MN, died Thursday, October 22, 2020, at CHI Health in Breckenridge. Marlys was born December 30, 1938, to Arthur and Amanda (Rehborg) Hooge in Wahpeton, North Dakota. As a girl she enjoyed ice skating, roller skating, swimming, running, horseback riding, and her pet dogs, cats, and horses. She attended school in Wahpeton, graduating in 1956. Marlys then completed classes at the Wahpeton Science School. In 1954, Marlys met Merrill Griggs at the ice-skating rink. After dating for four years, they got married at Wahpeton Emanuel Lutheran Church. In 1959 their daughter Malane was born, followed by son Marlon in 1965, and daughter Mellicent in 1972. Marlys loved their family activities including snowmobiling, camping, and participating in dog shows. She earned a plaque for her volunteer hours with 4H, which is hanging on the “Wall of Fame” in the Wilkin County courthouse. She also taught majorette skills in the school system. After her schooling, Marlys was a phone operator, later was employed by Pamida, Skyvision, Fairmount Grocery Store, Nelson Ford, 3M, and St. Francis Hospital in the housekeeping department. Marlys loved children and provided child care throughout her life. She also loved music and sang with the Musical Art Group, Art of the Lakes, and at every opportunity that came along, weddings, anniversaries, school homecoming “sweet and lovely” and at the March of Dimes telethon. She was a pianist and organist in church, an avid artist, painting and selling many paintings, a co Cub Scout leader, Fairmount Twirletts, a 4-H Dog Program leader, and was a member of a bowling league. She always had bakery goods on hand and the coffee pot on in case company would stop by for a visit. Marlys was preceded in death by her parents; husband, Merrill; infant son, Marcus, and brother, Marvin Hooge. Survivors include her children, Malane (Dean) Brandenburger of Rosholt, SD, Marlon (Kris) Griggs of Roseville, MN, and Mellicent Griggs of Breckenridge, MN; brother, Leroy Hooge of Bakersfield, CA; seven grandchildren, and ten great-grandchildren. Visitation: 9:00 a.m. to 10:00 a.m., Wednesday, October 28, 2020, at the Olson Funeral Home in Fergus Falls, MN Service: 10:00 a.m., Wednesday, October 28, 2020, at the Olson Funeral Home in Fergus Falls, MN, with live-stream at 10:00 a.m. Please refer to the Tribute Wall on the funeral home website for a link to the service. Interment: Fairmount Cemetery in Fairmount, ND Arrangements are provided by the Olson Funeral Home in Fergus Falls. Online condolences may be sent to www.olsonfuneralhome.com

The family of Marlys Griggs created this Life Tributes page to make it easy to share your memories.