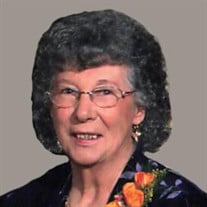 Marlene Mary Thompson Suchy, 88, of Underwood, MN passed away on Sunday, March 22, 2020, at PioneerCare in Fergus Falls. Marlene was born in Brandon, MN on May 25, 1931, to Cyril and Anna (Koeplin) Wagner. She attended school and spent her childhood in Brandon, MN. On December 14, 1948, she married her hometown sweetheart, Wilton Thompson in Brandon. They moved to Underwood, MN where they farmed and lovingly raised their family of nine children. During their 25 years together, Marlene’s days were filled with helping on the farm, cooking, and caring for their family. Sadly, Wilton passed away unexpectedly on June 17, 1974 and Marlene was left with five of the nine children still at home. She then worked outside of the home at the Highway Inn, Fergus Falls, and soon was employed by the Underwood School, in the kitchen, where from 1975 until her retirement in 1991, she was known for her homemade (from scratch) caramel rolls and buns. Marlene met Richard Suchy from Millerville, and after a 14-year courtship, they were married at Our Lady of the Lake Catholic Church in Battle Lake on April 8, 1989. This marriage brought Richard’s daughter, LuAnn, into the family. Richard and Marlene made their home together in Underwood. Together they enjoyed morning coffee, card playing, and dancing. Marlene and Richard were crowned the first Senior King and Queen Royalty for the Underwood Harvest Festival. Richard passed away May 22, 2018. Marlene loved and cherished her family. Attending all the family activities was her top priority and greatest joy. She was well known for her delicious cooking and baking, and it wasn’t unusual for her to whip up a Sunday dinner for 40 plus people. She enjoyed gardening, embroidery, quilting, and watching her birds. She was a very giving and loving person to everyone and she always made sure there was food for those in need and had treats (especially her homemade donuts) for whomever stopped by. Marlene was especially proud of all of her grandchildren and treasured the time she spent with them. She had a way to make each one of them feel special. Marlene also enjoyed playing whist and spending time with her card friends. She appreciated these good friends who always made sure she made it to cards each week. She lived her life to the fullest and truly enjoyed all her family and friends. Preceding her in death were her parents, Cyril and Anna Wagner; husbands, Wilton Thompson and Richard Suchy; brother, Dale Wagner, and sister, Elreen Coates. She is also preceded in death by her son-in-law, Steve Mark; grandchildren, Heidi Nelson, Jacob Ness, Baby Girl Thompson, and Mackenzie Klinnert, and numerous in-laws. Survivors include her children, Bonnie (Russ) Bye of Underwood, Dick (Kathi) Thompson of Sierra Vista, AZ, Peggy (Randy) Nelson of Battle Lake, Sue (Brian) Rismoen of Fergus Falls, Sharon Mark of Underwood, Tammy (Jim) Carter of Fergus Falls, Brenda Ness of Fergus Falls, Curt (Roxanne) Thompson of Battle Lake, Ron (JoAnn) Thompson of Fergus Falls, and LuAnn (Buzzy) Woitas of St. Paul; 18 grandchildren, Lisa, Julie, Jeff, Jason, Lori, Michele, Cody, Bruce, Christy, Kari, Molly, Lacey, Kali, Tom, Megan, Sadie, Brady, Aaron; 18 great-grandchildren, and two great-great-grandchildren, with twin great-grandsons on the way; brothers, Roger (LaVerne) Wagner of Millerville and Marvin (Darlene) Wagner of Brandon, and brothers/sisters-in-law of the Suchy family, and numerous other family. Visitation: one-hour prior to the service at St. James Catholic Church, rural Underwood, MN Celebration of Life: 11:00 a.m. Saturday July 25, 2020 at St. James Catholic Church, rural Underwood, MN. Public Reception: Location to be announced at the Celebration of Life. Memorials are preferred to St. James Catholic Church, rural Underwood. Arrangements are provided by the Olson Funeral Home of Fergus Falls. Online condolences may be sent to www.olsonfuneralhome.com

Marlene Mary Thompson Suchy, 88, of Underwood, MN passed away on Sunday, March 22, 2020, at PioneerCare in Fergus Falls. Marlene was born in Brandon, MN on May 25, 1931, to Cyril and Anna (Koeplin) Wagner. She attended school and spent her... View Obituary & Service Information

The family of Marlene Thompson Suchy created this Life Tributes page to make it easy to share your memories.