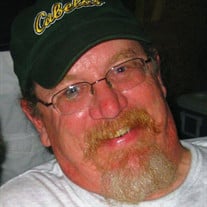 Mark “Grip” Clifford Hanson, 63, of Dent, died unexpectedly Sunday, May 3, 2020, as the result of a motorcycle accident. Mark was born January 1, 1957, to Clifford and Darlene (Perry) Hanson in Marshall, MN. He attended Minneota Elementary School and Fergus Falls High School, graduating in 1975. He then attended Fergus Falls Community College and received his RN Associates Degree in 1994. He retired as a Registered Nurse in 2014 after working for the State of Minnesota for 35 years. He specialized in psychiatric nursing and was very active in teaching Therapeutic Intervention Techniques to help keep his co-workers and clients safe. Although he was the “go to” guy for any difficult or dangerous situation, he was also known to be kind, compassionate, and like a big teddy bear with a passion for caring for others. Mark was a member of the Association of Harley Davidson Riders-West Chapter, A.B.A.T.E, Sons of the American Legion, lifetime member of the NRA, North American Hunting Club, and Minnesota Deer Hunting Association. He enjoyed riding his Harley Davidson, spending time at his cabin up north, hunting and being outdoors, collecting rocks, and spending time with his grandkids. Mark had a passion for reading, listening to the blues, and watching the Vikings. Mark will be remembered for his kind heart and willingness to help others. He would stand up for and defend anyone in need. Preceding him in death were his father, Clifford Hanson; step-father, Orv Sigurdson; brother-in-law, Mark Ringquist, and grandson, Joshua Ballweg. Mark is survived by his children, Danielle (Lonnie) Ballweg of Underwood and Nick (Sierra) Hanson of Kent; grandchildren, Madison, McKinlee, Bryson, and Scarlett Mark Ballweg and Raina Rettig Hanson; his mother, Darlene Hanson Sigurdson; siblings, Tom (Carrie) Hanson and Connie Ringquist of Fergus Falls; and step-sister, Vicki (Jim) Coy of Columbia, Missouri; many nieces and nephews, and numerous friends. A private family service will be held. A Celebration of Life will be held at a later date. Arrangements are provided by the Olson Funeral Home in Fergus Falls. Online condolences may be sent to www.olsonfuneralhome.com

The family of Mark C. Hanson created this Life Tributes page to make it easy to share your memories.