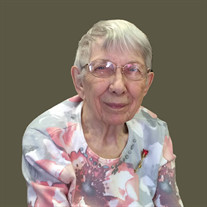 Marjorie Mae Arnold, 96, a resident of Fergus Falls, passed on at Pelican Valley Health Center in Pelican Rapids, on Wednesday, February 28, 2018. She was born May 7, 1921, in Eugene, Vermillion County, Indiana, the daughter of Rebecca Ann (McClellan) and William Winfield Whittington, the youngest of eight siblings. In the early 1920’s the family moved to New Haven, Logan County, Colorado, to farm. She was baptized in the Methodist church and later confirmed in the Episcopal church. In 1937 she moved with some of her family to Cambria, San Luis Obispo County, California. Marjorie graduated from Cambria Coast Union High School in 1939 both as valedictorian and a lifetime California State Scholarship member. She was active in band and orchestra, playing the piano and drums. She remained at home employed at the Cambria Telephone Exchange Switchboard until 1942 when she transferred to San Jose, California, to Pacific Telephone and Telegraph Company where she was operator, then supervisor, and finally instructor. From 1942 to 1945 she served as a volunteer Red Cross nurse’s aide. During this time she was accepted into the Order of the Eastern Star. Marjorie met Ralph William Arnold in 1944, and they were married at Trinity Episcopal Church in San Jose, California, on July 24, 1945. The couple made their first home in Anchorage, Alaska, although Marjorie remained in Seattle, Washington until World War II officially ended, again employed by Pacific Telephone and Telegraph Company. When she arrived in Alaska, she was employed by the City of Anchorage in the City Clerk office. They then moved to Palmer where they started a weekly newspaper, the Matanuska Valley Post, and the Valley Telephone Exchange, taking it over from the Alaska Railroad. The newspaper was recognized in the Alaska Who’s Who. In 1953 they left Alaska and moved to Woodland, Yolo County, California. Marjorie was employed as Yolo County Deputy County Superintendent of Schools. In 1959 the family moved to Yuma, Arizona, where Marjorie was employed at the Kofa High School Bookstore as manager and later at Imperial Dam. Later she and Ralph both worked for the Department of Defense at the Yuma Proving Grounds, retiring from there in 1983. She was a member of St. Paul’s Episcopal Church in Yuma where she served as Sunday school teacher, and was an Episcopal Church Women member, corresponding secretary, and kitchen manager. She sang in the St. Cecelia Choir for 25 years. She also participated in summer Bible School and the Festival of Arts for many summers. During this time she also served as a troop leader for Brownies, Junior Scouts, and Senior Scouts. Ralph died June 9, 1991, and Marjorie continued living in Yuma for 10 years before moving to Fergus Falls, Minnesota on July 1, 2001, to be near her daughters and their families. Her hobbies included embroidery work, fabric painting, music, reading, and many family pets. Preceding her in death were her parents; her husband, Ralph; and siblings, Martha, Richard, Norwin, Wendell, and Eugene. Survivors include her daughters, Glenys (Gerhard) Ehlert of Pelican Rapids, Janice (David) Ehlert of Fergus Falls; five grandchildren, Carrie Ehlert Newman, Bethany Cooner (Bing) Sellers, Jason (Erin) Ehlert, Jeremy Ehlert, Allison Ehlert; six great-grandchildren, Joseph and Jonathan Newman, Madison and Nathan Cooner, Bryan Sellers, Kendall and Bryn Ehlert, siblings, Alice Potampa of Seattle, WA, and Allen (Rena) Whittington of Eugene, OR. Visitation: One hour prior to the service at the funeral home Service: 3 p.m. Saturday, March 3, 2018, at the Olson Funeral Home Chapel in Fergus Falls, MN Clergy: Reverend Noel Rich Interment: Desert Lawn Memorial Park, Yuma, Arizona Olson Funeral Home in Fergus Falls is in charge of the arrangements. Online condolences may be sent to www.OlsonFuneralHome.com

Marjorie Mae Arnold, 96, a resident of Fergus Falls, passed on at Pelican Valley Health Center in Pelican Rapids, on Wednesday, February 28, 2018. She was born May 7, 1921, in Eugene, Vermillion County, Indiana, the daughter of Rebecca Ann... View Obituary & Service Information

The family of Marjorie Mae Arnold created this Life Tributes page to make it easy to share your memories.

Marjorie Mae Arnold, 96, a resident of Fergus Falls, passed on...