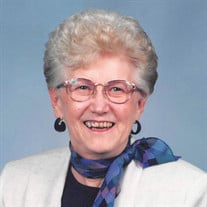 Marion Arndt, 86, of Fergus Falls, died peacefully on December 7, 2018, at the Broen Memorial Home in Fergus Falls. She was born on April 2, 1932, in Madelia Community hospital to Emil and Mabel (Selland) Anderson. They raised her on a farm alongside her two younger sisters, Ellen and Elsie. She attended District 7 country school through 8th grade and then transferred to high school in Madelia, MN, from which she graduated in 1950. In her high school years, she sat in her classes alphabetically in front of a young man who loved to tease her. Teachers suggested she marry Loren Arndt so they could banter for the rest of their lives. Taking the teachers advice, Loren and Marion married on July 31, 1952, while Loren was on leave from the army. They spent the next 18 months apart while Loren served in Korea. Upon Loren's return, they eventually settled on a farm in Linden Township, near Hanska, where they raised their two daughters Kathryn and LeAnn. In 1982 they sold the farm and moved to Fergus Falls. Marion possessed many talents. She loved to sew, making or altering clothes for her family. Many outfits she made for her girls were handed down to eagerly awaiting cousins, over and over again since once she made something it lasted. Marion was a talented musician. She was the organist for Faith Lutheran Church in Madelia for 34 years. She was a woman of faith, not only serving as organist, but sang in the choir, taught Sunday School, was a member of Ladies Aide, Gold Band, council and youth leader. Outside of church she was involved with her children's activities, especially band and 4-H. Whenever anyone needed anything, Marion volunteered or opened her home. Baking and cooking were a passion. She collected cookbooks and loved to try new recipes. She would make enough sometimes, like her chicken salad to share with the entire neighborhood. She was most famous for her bread, affectionately called "Grandma buns" by her grandchildren. They graced the table at every family gathering along with her strawberry jam. She always helped on the farm from driving truck to chasing pigs. She also worked in Madelia at Cerny's clothing store showcasing her sewing talents and ability to help others shop. Upon moving to Fergus Falls she continued her retail experience through employment with Herbergers. Marion's passion was her grandchildren and great grandson. She loved to spoil them and act silly with them. She loved sewing them special outfits and even a costume or two. Whenever they called, she was always there. She loved being their Nana. Marion will be missed by many. She is survived by her husband of 66 years, Loren; daughter Kathryn Jacobson (Fergus Falls) son-in-law Everett, grandchildren, Erin and Ryan, great grandson Trey. Daughter LeAnn Fogelson (Alexandria)son-in-law Ron, grandchildren, Jackie and Megan (Shane Gibbons). Sisters Ellen Jacobson and Elsie Pace as well as many nieces and nephews. She was preceded in death by her parents Emil and Mabel Anderson. Visitation: one hour prior to the service at the church Service: 11 a.m., Tuesday, December 18, 2018, at Augustana Lutheran Church, Fergus Falls Clergy: Reverend Ben Durbin Interment: Oak Grove Cemetery, Fergus Falls Arrangements provided by Olson Funeral Home in Fergus Falls. Online condolences may be sent to www.OlsonFuneralHome.com

Marion Arndt, 86, of Fergus Falls, died peacefully on December 7, 2018, at the Broen Memorial Home in Fergus Falls. She was born on April 2, 1932, in Madelia Community hospital to Emil and Mabel (Selland) Anderson. They raised her on a farm... View Obituary & Service Information

The family of Marion R. Arndt created this Life Tributes page to make it easy to share your memories.