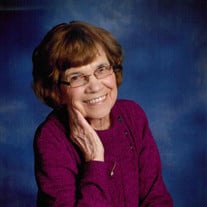 Marilyn Sorben, 87, passed away on Sunday, January 17, 2021 at PioneerCare in Fergus Falls, MN. Marilyn Jean Thom was born in Fergus Falls on February 23, 1933, to Reinhardt and Marybell (Orndorff) Thom, the fifth of seven children. She grew up on the family homestead in Maine Township near Phelps Mill, attended country school, and graduated from Underwood High School in 1951. On August 31, 1951 she married Ernest Sorben in Fort Devens, Massachusetts. While Ernie was in the Army, they lived in Anchorage, Alaska, where their first child Rebecca, was born. Upon Ernie’s military discharge in 1954, they moved back to Fergus Falls, and their second child, Valerie, was born in 1957. Beginning in 1957, they lived in several different parts of the country due to Ernie’s job as an Electronics Engineer with IBM, including Kingston, NY, Madison, WI, Great Falls, MT, Boulder, CO, Poughkeepsie, NY, Rochester, MN and even England for a while. Marilyn was a homemaker while the girls were growing up and later worked at Hallmarks in Boulder and Bachman’s Floral and JB Hudson Jewelers in Rochester. In 1988, Ernie retired from IBM, and they moved to Fergus Falls where they built a house that they lived in for the next 30 years on Lundy’s Lane. In the 1990s, Marilyn worked part-time for Welander Jewelers. They also started spending their winters in Arizona where they enjoyed many fun times with their snowbird friends. While living in Fergus Falls, they became members of Zion Lutheran Church. Marilyn was an avid Minnesota Twins fan and enjoyed watching “The Big Bang Theory.” Marilyn was known for being an excellent cook and baker, specifically her ham gravy, potato dumplings, and maple-frosted cupcakes, hosting many holiday meals over the years. She was also a skilled seamstress and sewed most of her daughters’ clothes when they were growing up. She was a loving mother and grandmother, spending a lot of time with her grandkids playing games and working on activities with them. She had a kind spirit and provided a warm inviting home to everyone she knew. Marilyn was preceded in death by her parents; husband Ernie who died in 2019 after 68 years of marriage, siblings Elroy (Shirley) Thom, Ellen (Cliff) Peterson, David (Jeanette) Thom, Karl Thom, infant brother Randolph, sister-in-law Lorraine Healy, and grandson-in-law Shad Forsman. She is survived by her daughters Rebecca (Craig) Jorgensen of Fergus Falls, Valerie (Mark) Schoolmeesters of Dayton, MN, grandchildren Zachary (Jill) Fjestad of Fergus Falls, Kelsey Fjestad of Bloomington, MN, Keisha Forsman of Champlin, MN, Cayla (Geoff) Jones, of Anoka, MN, step-grandchildren Jeremy (Darcy) Jorgensen of Campbell, MN, Jessica (Daren) Kaehler of Breckenridge, MN, and Ryan (Katie) Jorgensen of West Fargo, ND, sister Margery (Leonard) Willard of Lynnwood, WA, six great-grandchildren, ten step great-grandchildren, one step-great-great grandchild, and many nieces and nephews. Memorials preferred to Zion Lutheran Church in Fergus Falls, LB Hospice, and Oak Grove Cemetery. A private family memorial service will be held with Live-stream at 11:00 a.m. on Saturday, January 30, 2021. Please refer back to the funeral home website and Marilyn’s Tribute Wall for a link to the live-stream. Clergy: Reverends Christopher Eldredge and Nancy Eldredge Hess Interment: Oak Grove Cemetery, Fergus Falls, MN Arrangements with the Olson Funeral Home in Fergus Falls. Online condolences may be sent to www.olsonfuneralhome.com

Marilyn Sorben, 87, passed away on Sunday, January 17, 2021 at PioneerCare in Fergus Falls, MN. Marilyn Jean Thom was born in Fergus Falls on February 23, 1933, to Reinhardt and Marybell (Orndorff) Thom, the fifth of seven children. She grew... View Obituary & Service Information

The family of Marilyn J. Sorben created this Life Tributes page to make it easy to share your memories.