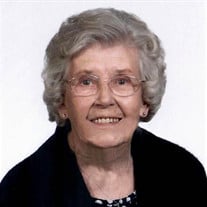 Marie Pearl (Formo) Anderson, 96, a resident of Fergus Falls, passed away on Saturday, February 10, 2018, at Lake Region Healthcare in Fergus Falls, MN. Marie’s strong belief in God and the life-everlasting gave her comfort throughout her life and she is now at peace with our Heavenly Father. Marie was born on August 30, 1921, to Albert and Julia (Jacobson) Formo on the family farm in Elizabeth Township. She was baptized on October 23, 1921, and confirmed in 1934 at the Tonseth Lutheran Church in Friberg Township, Erhard, Otter Tail County, Minnesota, by Pastor M.S. Gjerde officiating. Marie attended country school through eighth grade at the Rural District 203 (Long Lake) School and then graduated in 1939 from the Fergus Falls Washington High School. Education was always important to Marie and she would often reminisce about the good times that she had with all of her classmates. Marie remained close to her high school friends and always looked forward to her class reunions which in the later years became yearly reunions. The last big reunion was their 75th in 2014. On April 27, 1940, at the Tonseth Lutheran Church, Marie married her lifelong soulmate, John “Jack” Andrew Anderson, who passed away on June 1, 1997. They were happily married for 56 years and now will once again be reunited for eternity. They lived 56 years in their house on West Alcott in Buse Township, that Jack built and Marie continued to live in that house until 2013. On September 16, 2013, Marie moved into the Woodland Lodge where she enjoyed interaction with the wonderful staff and many new friends. Marie was the ultimate homemaker and highly skilled in baking, sewing (winning the Otter Tail County Wool Contest for her red wool dress in 1955) and vegetable and flower gardening. She worked as a sales clerk for F.W. Woolworth prior to her marriage and then later as a private seamstress and also bookkeeper for Anderson Brothers Well Drilling. She was involved in many community and school activities including P.T.A., Mother’s Club, Cub Scout Leader and Homemakers Group. She was an active member since 1941 in the Augustana Lutheran Church and served as a Sunday School Teacher, member of the Young Women’s Group, a continuous member of WELCA and other activities over the years. She served as a “Meals by Wheels” Volunteer and also as a Lake Region Hospital Volunteer. She held a lifelong membership in the V.F.W. Auxiliary and also was a member of the Y’s Folks of the Y.M.C.A. and chaired and served on many of their committees. Marie was also the “historian” in the family and did research and published the Anderson genealogy before computers were invented. Marie will be remembered for her love of life, God, family, friends, nature, gardening, flowers, sewing, quilting, crocheting, cooking, playing cards, games and cross-word puzzles. Family and friends always knew there would be fresh coffee and treats served around the kitchen table at the Anderson’s. Everyone was welcomed with a big hug and smile. Marie touched the life of every person she met. Marie is survived by her two sons, Gary Wayne (Chris) Anderson and Craig Jon (Marcia) Anderson; 6 grandchildren, Grant Thomas (Dawn) Anderson, Paula Marie (Cory) Pederson, Kelly Rae Phennig, Kristy Nicole Phennig, Clayton Edward (Darla) Wilson, Brian Christopher Bishko; great-grandchild, Kaitlin Ann Pederson; sister-in-law, Lucy Peterson of Vancouver, WA; as well as numerous cousins, nieces, and nephews. Preceding her in death were her parents, Albert Formo (1981) and Julia Anna (Jacobson) Formo (1975); husband, John “Jack” Andrew Anderson (1997); infant sister, Anna Formo (1922); daughter-in-law, Gwyneth Ann (Thompson) Anderson (1994); as well as numerous sisters and brothers-in-law. The family extends a special Thank you to the kind and compassionate care that Marie received by staff at the Woodland Lodge where she spent the last 4 years of her life and the excellent medical care that she received while hospitalized at Lake Region Healthcare. The family would also like to extend their gratitude to the Olson Funeral Home for their comforting guidance provided at this time. Memorials are preferred to the Augustana Lutheran Church. Visitation: 5-7 p.m. Wednesday, February 14, 2018, at Olson Funeral Home in Fergus Falls, and resumes one hour prior to the service at the church Service: 11 a.m. Thursday, February 15, 2018, at Augustana Lutheran Church in Fergus Falls Clergy: Pastor Ben Durbin Interment: Knollwood Memorial Gardens, Fergus Falls, MN Arrangements are provided by the Olson Funeral Home in Fergus Falls. Online condolences may be sent to www.OlsonFuneralHome.com

The family of Marie Pearl Anderson created this Life Tributes page to make it easy to share your memories.