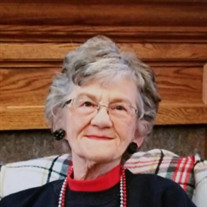 Margaret “Maggie” (Lofton) Soliah, 81, of Fergus Falls, died Wednesday, July 1, 2020, at the Pioneer Cottages under the care of LB Hospice. Margaret Ann Lofton was born February 11, 1939, in Fergus Falls to Art and Myrtle (Carlson) Lofton. She attended Lincoln Elementary School and graduated from Fergus Falls Senior High School in 1957. She was confirmed at First Lutheran Church in Fergus Falls. On September 14, 1958, she married Larry Wayne Soliah at Aastad Lutheran Church. To this union three children were born, Craig in 1959, Lynn in 1961, and Marc in 1962. She enjoyed her bowling league nights and going to the Elks functions, especially the out-of-town ones where she would receive many different Elks pins. She later donated the pins to the Elks. Maggie spent many years as a homemaker. When her children were in high school, she went into the workforce. She was a receptionist for David Pederson at Heritage and then later for Lon and Sonja Moe at the Hair Gallery. She was also a shoe salesperson at Herbergers, and then a manager at M&H, Lakeway, the Fleet Farm C-store, and Ortons until she decided to retire. Preceding her in death were her parents, Art and Myrtle Lofton; in-laws, Merville and Corrine Soliah; an infant daughter, and sister, Ethel Ledding. She is survived by Larry of Jacksonville, FL; her children, Craig of Moorhead, Lynn, and Marc both of Fergus Falls; grandchildren, Adam Lerbakken of Fergus Falls, Nickolas Soliah of Fergus Falls, Tyler Peterson of Underwood, Joille Kjenstad of Fargo; great-grandchildren, Piper, Remi, and Harlow Soliah, Lauriauna and Avery Lerbakken, Jamison Kjenstad, and Axel Peterson; sisters, Donna (David) Johnson, Marian Fronning, and many nieces and nephews. A special thank you to the staff at Pioneer Cottages Homestead House, the LB Hospice Staff, and the Cancer Center Staff. A family service will be held. Clergy: Reverend Kate Bruns Interment: 12:00 p.m., Saturday, July 11, 2020, at Aastad Lutheran Cemetery, Fergus Falls, Minnesota Arrangements are provided by the Olson Funeral Home in Fergus Falls. Online condolences may be sent to www.olsonfuneralhome.com

The family of Margaret "Maggie" Soliah created this Life Tributes page to make it easy to share your memories.