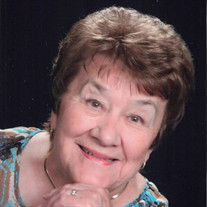 Marcy (Johnson) Scully, 82, of Fergus Falls, went to be with her Lord peacefully on August 7, 2020, with her devoted husband by her side. Marcy was born October 1, 1937, to Bernoff and Myrtle Johnson in Pelican Rapids, MN. She grew up in rural Pelican Rapids, attending country grade school and Pelican Rapids High School. She married Larry Scully on July 11, 1958. They had one daughter, Cindy. Larry and Marcy moved from Duluth back to Fergus Falls in 1970 and have lived there since. Marcy was very active in her community. She served on the parish council at Our Lady of Victory Catholic Church. She was also a member of the Christian Mothers Organization. She served several years with the Stevens Ministry. Marcy was instrumental in organizing the Big Brother and Big Sister Program in Fergus Falls. She was actively involved in that program and was a Big Sister for several youth. Marcy and Larry were involved in the local and state Foster Parent Association. Over the years they cared for several foster children. Marcy was also a long-term Board Member and volunteer at the Food Shelf in Fergus Falls. She enjoyed team bowling for several years and attended the National Bowling Tournaments, winning several trophies. Marcy was a gifted musician who played several instruments and enjoyed playing and listening to music through out her life. She was an animal lover, a great gardener, and cook. She enjoyed snowmobiling and motorcycling. Marcy and Larry enjoyed their participation in the local car clubs over the years. She was excited that she was able to visit her relatives in Norway. Preceding her in death were her parents and sister, Lyla Williamschen. Marcy is survived by her husband, Larry; daughter, Cindy Fogel; granddaughter, Ryan; grandson, Cassidy; two long-term foster children, Bonnie Nyberg and Ken Helberg, and several other foster children and their children. Walk-Through Visitation: 5:00-7:00 p.m., Wednesday, August 12, 2020 at the Olson Funeral Home in Fergus Falls, Minnesota, with a prayer service at 6:45 p.m. Service: 11:00 a.m., Thursday, August 13, 2020, at Our Lady of Victory Catholic Church in Fergus Falls, Minnesota Clergy: Father Alan Wielinski and Deacon Chuck Kampa Interment: St. Otto’s Cemetery, Fergus Falls Arrangements are provided by the Olson Funeral Home in Fergus Falls. Online condolences may be sent to www.olsonfuneralhome.com

Marcy (Johnson) Scully, 82, of Fergus Falls, went to be with her Lord peacefully on August 7, 2020, with her devoted husband by her side. Marcy was born October 1, 1937, to Bernoff and Myrtle Johnson in Pelican Rapids, MN. She grew up in rural... View Obituary & Service Information

The family of Marcy Scully created this Life Tributes page to make it easy to share your memories.