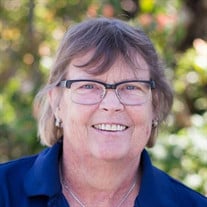 Marcia Anne Sundberg, 62, died January 19, 2019 in Winter Park Florida after a life-long battle with Lupus. She was born on July 17, 1956 in Fergus Falls, daughter of David and Anita (Gadow) Sundberg. She attended Fergus Falls Township School district 1430, a one-room K-6 school, and graduated from Fergus Falls High School in 1974. After one year at Gustavus Adolphus in St. Peter she transferred to Bemidji State University where she graduated in 1978 with a degree in Mass Communications. She moved to Winter Park, Florida after graduating college and lived the rest of her life there. Marcia was an avid photographer and worked several years at Colonial Photo and Hobby in Orlando when she first moved to Florida. During her early years in Winter Park she also worked at Disney World. In 1986 she earned her Master of Accounting Degree from the University of Central Florida. She worked in accounting and as a comptroller for many companies, including Wendy’s Corporate Office (which was called RAS, Inc.), Wayne Densch Company in Jacksonville, Brownies & Ferries Environmental Services, Halls Construction and Jacobs Engineering. In 2002, she and her partner Melissa Gosik purchased an organic pet food business in Winter Park called Pookie’s Bow Wow Bakery, a business that she ran as long as she was able. In 2008 Marcia and Melissa established Pookie’s Rescue Fest, an annual event that promoted the adoption of homeless pets and raised money to benefit pet rescue organizations in Central Florida. Animals were always extremely important to Marcia. From the horse she always wanted as a young girl to the many beloved dogs and cats that were the focus of her personal and business life, pets had huge a role in her life. In 1996, Marcia went on an epic journey to Peru to climb to Machu Pichu. This was on her bucket list and she was determined to do it while she was healthy and so she did. Marcia was active in fighting for Women’s Rights and LGBTQ issues. She attended the Women’s March on Washington in 1987 and in 1993. She was also an active supporter of LCN (Loving Committed Network). She was preceded in death by her mother, Anita and all her grandparents. Marcia is survived by her father, David (Ellen) Sundberg; brother, Mark (Tanya) Sundberg; partner, Melissa Gosik; nephews, Ben and Sam Sundberg; step sister, Lori Flaten; step brother, Mike (Robyn) Flaten; step-nephew, Kristian and several aunts, uncles and cousins. To honor Marcia, please donate to your favorite animal rescue organization. Visitation: One hour prior to the service at the church. Local Memorial Service: 10:30am, Saturday, February 9, 2019 at Augustana Lutheran Church in Fergus Falls. Clergy: Reverend Ben Durbin Interment: Oak Grove Cemetery in Fergus Falls. Funeral arrangements provided by Olson Funeral Home, Fergus Falls. A memorial service will be held in Winter Park, FL on February 24, 2019.

The family of Marcia Anne Sundberg created this Life Tributes page to make it easy to share your memories.