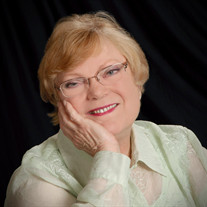 Marcene Ellen Hagen, 73, of rural Underwood, passed away on March 4, 2019, at Lake Region Healthcare in Fergus Falls. Marci was born on November 17, 1945, in Fergus Falls, MN, to William and Mabel Grimm. She graduated from Fergus Falls High School in 1964 and continued her education at Mankato State University, receiving a Bachelor’s Degree in Home Economics from North Dakota State University in 1968. After a four-and-a-half-year romance, she and David Hagen were married on November 30, 1968, at First Lutheran Church in Fergus Falls. They lived in the Fergus Falls area for several years, where she worked at the Regional Treatment Center in the Dietary Department, until buying the Hagen family farm in 1973. She and David worked the farm together and in 1976 had their son, Derek. She enjoyed motherhood and the farming lifestyle, as well as gardening, quilting, traveling and reading. She was in her element when entertaining and socializing with friends and neighbors, as so many can attest to. As a member of Tingvold Lutheran Church, she served in many capacities, from Sunday School teacher to church president. She was also active in the Women of the ELCA, Fergus Falls Area NOW, the Otter Tail County DFL, and served for many years as an election judge. She was preceded in death by her parents; two brothers, Wilton Grimm and Chandra Grimm. She is survived by her husband of 50 years, David; son, Derek Hagen of Underwood; as well as her brothers and sisters-in-law, Shirley and Burnie Wendland of Fergus Falls, and Betty and Maynard Neuleib of Underwood. Also surviving are extended family, including Gordon (Mary) Johnson as well as numerous cousins, nieces, and nephews. She will be greatly missed and well-remembered by all. Memorials are preferred to Tingvold Cemetery Fund Visitation: 4:00 p.m. – 6:00 p.m., Wednesday, March 13, 2019, at Olson Funeral Home and will resume one hour prior to the service at the church. Memorial Service: 11:00 a.m., Friday, March 15, 2019, at Tingvold Lutheran Church, Underwood Clergy: Reverend Martha Halls Interment: Tingvold Lutheran Cemetery, Underwood, MN Arrangements are with the Olson Funeral Home in Fergus Falls. Online condolences may be sent to www.OlsonFuneralHome.com

The family of Marcene E. Hagen created this Life Tributes page to make it easy to share your memories.

Marcene Ellen Hagen, 73, of rural Underwood, passed away on March...