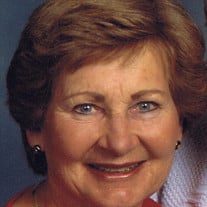 Marcella (Marcy) Amy Sundberg, 85, of Ottertail, died Monday, February 1, 2021, at The Thomas House, in Perham, Minnesota, with both of her sons at her side. She was born in Underwood, Minnesota, on February 27, 1935, to Christian (Hardy) and Lillian (Johnsen) Johansen. She was raised on a farm near Underwood, along with 4 brothers and 3 sisters, and graduated high school there in May of 1953. In July of 1954, she married her high school sweetheart, Phil Sundberg, who enlisted in the US Air Force and followed him to Biloxi, Mississippi, where he worked as an Air Traffic Controller. After the Air Force, they moved to Fergus Falls, MN, and Phil went to work for the Otter Tail Power Company, which became a lifelong career. They moved several times for the company, and lived in Morris, MN; Milbank, SD; Fergus Falls, MN; Bemidji, MN; and Hallock, MN. Marcy had two sons, Lance and Brad, and focused on being a home maker until the kids were old enough for school. After that, she mainly worked secretarial jobs in the towns they lived, but also worked as a hairdresser part time in her home. She was an active volunteer for the Lutheran churches which they belonged to, and a member of her church circle groups. Later on, she was commissioned in the Stephen Ministries to assist her church and provide one-on-one support for others in need. Some of her favorite activities were gardening, cross-country skiing, golfing, painting, needlepoint, and cooking, but her most important activity was making her house a home. She really enjoyed bird-watching and there were lots of bird feeders, bird baths, and bird houses around the house. After retiring, Marcy and Phil moved to Ottertail, Minnesota, where they spent their time golfing and working in their yard. Later in life when Marcy was diagnosed with Alzheimer’s, Phil became her caregiver for the next 5 years until he passed away. They were married for 65 years. Preceding her death, are her parents, Hardy and Lillian, her brother’s Mervin, Ray, Neil, James, and sisters, Leona and Elaine. Survivors include her brother Richard Johansen, who lives in Fergus; her sons Lance, who lives in Portland, OR; and Brad, who lives in Ottertail. Memorials are preferred to the Thomas House, 701 3rd Avenue, Perham, MN 56573 Visitation: One hour prior to the service at the church. Memorial Service: 11 a.m. Saturday, February 6, 2021 at Calvary Lutheran Church, Perham, MN. Please refer back to the funeral home website and Marcella’s Tribute Wall for a Live Stream of the service on Saturday, February 6, 2021 at 11 a.m. Clergy: Reverend Erin Bovendam Burial: Oak Grove Cemetery, Fergus Falls, MN Arrangements are provided by the Olson Funeral Home, Fergus Falls, MN. Online condolences may be sent to www.olsonfuneralhome.com

Marcella (Marcy) Amy Sundberg, 85, of Ottertail, died Monday, February 1, 2021, at The Thomas House, in Perham, Minnesota, with both of her sons at her side. She was born in Underwood, Minnesota, on February 27, 1935, to Christian (Hardy) and... View Obituary & Service Information

The family of Marcella Sundberg created this Life Tributes page to make it easy to share your memories.