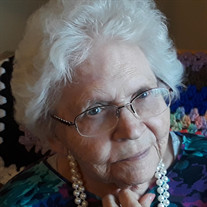 Magnhild “Alvina” Christopherson, 96, of Fergus Falls died November 2, 2018 at the Heritage Pioneer Cottage, Fergus Falls. She was born December 27, 1921, to Magnus and Alma (Hoel) Lund in Oscar Township, MN. She grew up in Oscar Township and graduated in 1942 from Washington High School in Fergus Falls. After high school she worked at Wright Memorial Hospital and eventually moved to Washington DC to work for the US Department of the Navy until 1946. In 1946 she returned to Fergus Falls and worked as Deputy Clerk of Court for Otter Tail County, where she was employed until 1948. On February 14, 1948, she married Arthur W. Christopherson in Rothsay, MN. The couple resided in Fergus Falls and raised 3 children. In 1968 she began working at Johnson Memorial Hospital in Dawson, MN in Medical Records. Upon her retirement in 1980, Alvina returned to Fergus Falls. In 2004 she moved to Mill Street Residence until 2012 and most recently she resided at the Heritage Pioneer Cottage. Alvina was a member of Bethlehem Lutheran church, Sons of Norway, Crippled Children’s Clinic, Y’s Folks, Senior Citizens, Otter Tail County Historical Society, VFW Auxiliary, Eastern Star and was involved in many Red Cross Blood Drives. She enjoyed baking and singing. Travel was something Alvina loved to do through the years and she enjoyed traveling with Gopher Travelers of Elbow Lake from 1983 to 2000. Preceded in death by her parents; husband, Arthur, who died in 1979 and sister, Ella. She is survived by her children, Sandra (Bruce) Johannes of Fargo, ND, Dr. Barbara Storslee of Antioch, IL, James Christopherson of Fergus Falls; grandson, Andrew Johannes of Elk River, MN and a sister, Thelma Wigdahl of Andover, MN. Memorials are preferred to Bethlehem Lutheran Church, Fergus Falls, LB Hospice, Fergus Falls or the organization of the donor's choice. Visitation: One hour prior to the service at the funeral home. Service: 1:00 PM, Wednesday November 7, 2018 at the Olson Funeral Home Chapel, Fergus Falls Clergy: Rev. Tom Peterson Interment: Knollwood Memorial Gardens, Fergus Falls, MN

The family of M. Alvina Christopherson created this Life Tributes page to make it easy to share your memories.