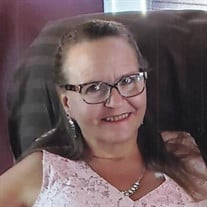 Lynne Drewelow, 54, of Fergus Falls, died Thursday, September 23, 2021, at her residence. My Life I, Lynne Browning (Weinkauf) Drewelow, was born in Thief River Falls, MN on January 14, 1967, to Grace (Wold) Busse and Dennis Torkelson. On February 23, 1967, my adoptive parents, Mary and Delbert Weinkauf, drove to Minneapolis in a snow storm to pick me up. I was baptized on March 19, 1967, (Palm Sunday) at Elim Lutheran Church in Clinton, MN. I grew up in the small community of Clinton and graduated from Clinton High School in 1985. Many residents of Clinton will remember me for my smile, my Christmas baked goodies, and the many hours I spent babysitting many of their children. Dale Drewelow and I were married May 30, 1992 (an event that many that attended will always remember). We have two Awesome boys! James was born January 4, 1995 and Adam (our little tax deduction) was born December 31, 1997. I started my nursing career as a CNA in 1987 and worked up the nursing ladder graduating from Fergus Falls Community College May 1995 with an RN degree. I started working at Lake Region Healthcare July 12, 1993, as a casual LPN on the surgical floor. My last position was in the Coumadin Clinic, which was one of my favorite positions. I am very honored to have my sister, Missy and my sister-in-law, Stacey follow in the nursing profession and hope I influenced others as well. I loved to travel and was grateful for the places I was able to go. I always took a gazillion pictures because I wanted to hold on to all the special memories. In 2011 I decided to do a search for my birth parents, to my surprise I discovered I had four older sisters and a younger brother and sister. We met in March 2012 (except Wendy and Marilyn), so we have been playing catch up and making memories ever since. In March of 2021, through 23 and me I discovered my birth father had five children as well. Slowly we have been making connections and getting to know each other. As I write this today, August 9, 2021, I am looking forward to James and Cheyenne’s wedding day on August 14. I am hoping that a majority of my siblings will be there and possibly a picture be taken of us all together. My parents, Mary and Delbert Weinkauf, Grace Busse, and Dennis Torkelson as well as my aunt Judy and Uncle Al have taken their place in heaven before me. I leave behind my husband, Dale of Fergus Falls; sons, James (Cheyenne) of Horace and Adam of Fergus Falls; sister, Melissa (Jim) of everywhere; brother, Dale (Stacey) of Milbank, SD; father-in-law, Jim (Ann) of Fergus Falls; brother-in-law, Robbie of Fergus Falls; sister-in-law, Becky (Kelly) of Wahpeton; Grace’s children, Marilyn (Rick) Scully of Thief River Falls, Wendy (Wayne) Stanfield of Bueno Park, CA, Kathy (the late Loren) Anderson of Duluth, Roxane (Jim) Rondorf of Thief River Falls, Brenda (Mike) Skibicki of Thief River Falls, and Leroy Busse of Duluth, and Dennis Torkelson’s children, Cyndi (Doug) Dusbabek of Hawley, Rhonda (Russ) Peterman of Richville, Tammy (Jim) Linder of International Falls, Deno Torkelson (friend Katie) of Hawley, and Lisa (Brent) Hannestad of Moorhead. As well as many very loved nieces, nephews, and friends. Memorial Gathering: 5:00 p.m. to 7:00 p.m. Thursday, September 30, 2021 at the Olson Funeral Home in Fergus Falls, with a prayer service at 6:30 p.m. Arrangements are provided by the Olson Funeral Home in Fergus Falls. Online condolences may be sent to www.olsonfuneralhome.com

The family of Lynne Drewelow created this Life Tributes page to make it easy to share your memories.