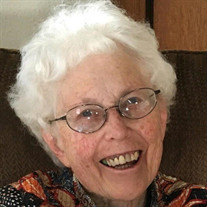 Luella A. Helland, 88, a resident of Fergus Falls, died Friday, May 30, 2020 at LB Broen. Luella Ardis Helland was born in Faribault, MN September 20, 1931, the daughter of Oscar and Hattie (Walker) Helland. Her childhood years were spent on a farm in Goodhue County, Minnesota. She attended a one-room rural school for eight years. The Helland family moved to Fergus Falls in 1945. There she attended Hillcrest Academy, graduating in 1949. Luella decided her on first day of school in first grade, that she would be a teacher. That goal was never forgotten during the years of preparation. After one year of normal training in Fergus Falls, she taught in rural schools of Otter Tail County for five years. During the summers of that time period, she attended Moorhead State Teacher’s College working on further education. In the late 1950’s, Luella taught for four years in a home for abused children in the Cumberland Mountains of Southeastern Kentucky. Luella pursued her college education in those early years, graduating twice from Moorhead State with a BS in Elementary Education in 1963, followed by an MS degree in Special Education a and Remedial Reading in 1981. Luella taught in Christian schools on the Navajo reservation in New Mexico and Arizona for 30 years, retiring in 1998 following a heart attack. She interrupted her teaching years for a short period of time in the late 70’s to return to Fergus Falls, keeping a promise to care for her parents. During that time period she worked as an activities director at the Broen rest home. She also taught for short periods of time in reservation schools in Quinault, WA., and in North and South Dakota. Upon returning to Minnesota she was lonesome for Native children, so she moved to Bemidji, MN where she worked with many Native American children in the public schools there for three years. She also worked in Red Lake and Redby churches helping with Sunday and Wednesday services. Her time in Bemidji was interrupted by a broken hip and other health problems causing her to move back to Fergus Falls. Her remaining years were spent living at LB Homes – Sheridan House, Alcott Manor, and Broen Home in Fergus Falls where she became involved in ministering to her fellow residents – visiting, reading to, and praying with them. As long as she was physically able, she could also be seen speedily pushing her walker down the streets to the public library, LRHC clinic, and ShopKo to name a few of her destinations. She spread encouragement and gratitude wherever she went – a reflection of God’s amazing grace. Luella was preceded in death by her parents, Oscar and Hattie Helland, and her four siblings – Lloyd (Ruth) Helland, Olive Helland, Harland (Mabel) Helland, and Carol Gunderson. Also preceding her were nephew, Timothy Gunderson, and grandniece, Heidi Helland. She is survived by her nieces and nephews – John (Terri) Helland of Fergus Falls; Carolyn (Tim) Penner of Goshen, IN; Bob (Terri) Helland of Madelia, MN; Larry (Pam) Helland of Columbia, SC: Mark (Cathie) Helland of Fergus Falls, Bill (Sally) Helland of Sioux Falls, SD; Wayne (Lisa) Helland of Fergus Falls; and Joan (Jim) Soholt of Minneapolis, MN and by brother-in-law, Norman (Pat) Gunderson. She is also survived by a large number of grand and great-grand nieces and nephews, all whom she loved and valued highly. In addition, she is mourned by her beloved teaching/ministry colleagues and Native American family in Arizona, New Mexico, and northern Minnesota. Luella’s family wishes to express gratitude to the doctors and staff at Lake Region Healthcare who have cared for her so faithfully through a multitude of health crises over the past years. In addition, we say thank you from the bottom of our hearts to the amazing staff and residents at LB Homes who have gone to great lengths to provide a life of independence for her, and who gave Luella the freedom to bless and encourage everyone around her. Her highest purpose in life was to touch the lives of everyone around her, pointing them to Jesus Christ. We must not forget to thank her colleagues and students from the Native American schools in which she gave so many years as an elementary teacher. They became her ‘first family’ whom she told of with pride and deep love so often, as she shared her life stories with us. Most of all, we thank God for the gift she has been to us – for her faithful, daily prayer for all of us by name right up to the end, and for her constant encouragement. She has been one of our greatest cheerleaders! Blessed be her memory! Memorials are preferred to three of the ministries Luella loved so much: Across Nations PL Box 9090 Window Rock AZ 86515-9090 Hillcrest Academy and Morning Son Christian School, both of Fergus Falls. Due to the limitations of COVID 19, a private family service will be held at the Olson Funeral Home Chapel, Fergus Falls, MN. Please refer back to her tribute wall for a Livestream on Saturday, August 22, 2020 at 11:00 am. The service will be live-streamed on Olson's website for friends who would like to watch. It will also be available in video form for later viewing on the website. Interment: Bethlehem Cemetery, Fergus Falls, MN Arrangements are provided by the Olson Funeral Home, Fergus Falls, MN. Online condolences may be sent to www.OlsonFuneralHome.com.

Luella A. Helland, 88, a resident of Fergus Falls, died Friday, May 30, 2020 at LB Broen. Luella Ardis Helland was born in Faribault, MN September 20, 1931, the daughter of Oscar and Hattie (Walker) Helland. Her childhood years were spent on... View Obituary & Service Information

The family of Luella A Helland created this Life Tributes page to make it easy to share your memories.