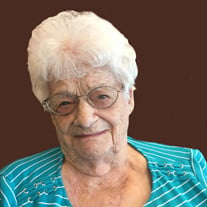 Lucille H. Samson, 100, died Sunday, June 2, 2019, at PioneerCare, Fergus Falls, MN. She was born July 10, 1918, in Dunnell, MN, the daughter of Floyd and Christina (Brix) Hartness. She was the second of three children with an older sister, Elois Hartness Ellwanger and a younger brother, James Hartness. In her childhood years, the family lived in various locations in southern Iowa. In January 1928, they moved to Minnesota, subsequently living in several locations before settling in the Clitherall area in 1934. Lucille married Clarence Samson on August 1, 1936, in Sisseton, SD. The couple had three children, Adrian, Sharon and Pamela. Clarence and Lucille lived in several locations in Minnesota where Clarence engaged in farming, driving truck for a creamery, and road construction. Lucille would assist by raising chickens, pigs, and growing a garden. In about 1943, they settled in Battle Lake. Lucille worked in several restaurants but most of her working career was at the Battle Lake Bakery. Clarence passed away in 1982, and Lucille moved to Fergus Falls in 1996. Lucille was an avid reader and enjoyed flower gardening, traveling, needlework and various other crafts, however her priority was always spending time with her family. She was known and loved for her kindness and loving dedication to her family and friends. Preceding her in death were her parents; her husband; her son; both of her siblings and a granddaughter. Surviving her are her two daughters, Sharon Benson and Pamela Ahrens of Fergus Falls; grandchildren, Robyn (Dave) Jessen, LeMoyne Benson, Michael (Debbie) Benson, Jeffery Benson, Tamara Johnson, Shannon Benson, Teely Samson, Shawn Artley; 17 great-grandchildren and several great-great-grandchildren. Visitation: One hour prior to the service at the funeral home Service: 1 p.m. Thursday, June 6, 2019, at Olson Funeral Home Chapel, Fergus Falls, MN Clergy: Reverend David Strom Interment: Lakewood Cemetery, Battle Lake Arrangements provided by Olson Funeral Home, Fergus Falls, MN Online condolences may be sent to www.olsonfunealhome.com

Lucille H. Samson, 100, died Sunday, June 2, 2019, at PioneerCare, Fergus Falls, MN. She was born July 10, 1918, in Dunnell, MN, the daughter of Floyd and Christina (Brix) Hartness. She was the second of three children with an older sister,... View Obituary & Service Information

The family of Lucille H. Samson created this Life Tributes page to make it easy to share your memories.