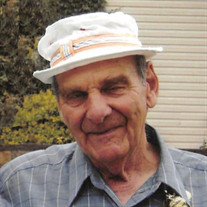 Lowell Drechsel, 86, a resident of Erhard, passed away Thursday, May 14th 2020, at his home under the care of his family and LB Hospice after a courageous 7-month battle with cancer. He was born January 23, 1934, in Friberg Township at his parent's home, the son of Otto and Bessie (Grant) Drechsel. Lowell was baptized on April 14, 1934, at Trinity Evangelical Church. In 1948, Lowell was confirmed at Tonseth Lutheran Church. As a boy, Lowell attended country school. On September 13, 1958, Lowell was united in marriage to Geneva Sumstad. The couple made their home in rural Erhard. They were both members of Tonseth Lutheran Church. Lowell worked six years at the Chemgro Fertilizer Plant, then worked 14 years at Elk River Concrete Company in Fergus Falls. In 1990 Lowell invented the Insulated Insul Vent for the sewer pipe on the roof of the house. He and his family ran this business for 13 years before selling to Productive Alternatives. He also assisted in caring for his wife when she was sick. In his later years he built bird-houses as a hobby. Lowell was a great horseshoe player. He played horseshoes for 50 years. During those 50 years he won many tournaments. To him this was one of his favorite past times. Another one of his past times was watching baseball and football games on TV. He enjoyed his family time, which also included spending time with his poodle named Joe. He loved playing dice and cards with his family. He enjoyed his monthly minister visits with Pastor Floyd and watching church on T.V. on the Sundays, when he was unable to make it to Tonseth. Lowell will be remembered as a family man. He was so proud of all his children and his grandchildren. He will also be remembered as a great husband. He will be deeply missed. Preceding Lowell in death were his wife, Geneva in 2018; his parents; his mother and father in-law; one sister, Laura Haarstick; four brothers, Alfred Drechsel, Wilfred Drechsel, Donald Drechsel, and James Drechsel; six sisters-in-law, Dorothy Drechsel, Diane Meder, Elaine Sydow, Loretta Sumstad, Edith Sumstad, and Elizabeth Nelson; four brothers-in-law, Gordon Haarstick, Chester Sumstad, Roger Sydow, and Donald Sumstad, and son-in-law, John J. Jacobson. Lowell is survived by sons, Delayne (Sandra) Drechsel of Erhard, Randy (Jackie) Drechsel of Fergus Falls; daughter, Darla Jacobson of Erhard; three grandchildren, Wes (Tiffany) Drechsel of Underwood, Adam Peasley of Erhard, and Jenna Peasley of Erhard; three sisters-in-law, Carol Drechsel of Erhard, Carol Drechsel of Fergus Falls, and Shirley Sumstad of Menahga, MN; two brothers-in-law, David (Trudie) Sumstad of WallKill, NY and Steven (Regina) Sumstad of Andover, MN and many nieces, nephews, and other family members, along with many friends. He is also survived by his poodle Joe. A private family service will be held with Reverend Darrel Saathoff officiating. Interment: Tonseth Lutheran Cemetery, rural Erhard, MN Arrangements are provided by the Olson Funeral Home in Fergus Falls. Online condolences may be sent to www.olsonfuneralhome.com

Lowell Drechsel, 86, a resident of Erhard, passed away Thursday, May 14th 2020, at his home under the care of his family and LB Hospice after a courageous 7-month battle with cancer. He was born January 23, 1934, in Friberg Township at his... View Obituary & Service Information

The family of Lowell Drechsel created this Life Tributes page to make it easy to share your memories.

Lowell Drechsel, 86, a resident of Erhard, passed away Thursday,...