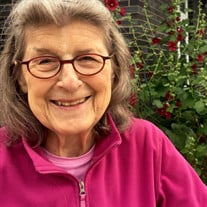 Lorna J. Johnson, 92, of Fergus Falls, died Friday, April 17, at the Ashby Living Center. She was born Aug. 29, 1927, in Frazee, to Loyal and Olga (Fick) Fairbanks. Lorna's family, including her siblings -- Gladys, Elaine, Norman and Lois -- lived in the Vergas-Frazee area until 1935, when they moved to Fergus Falls. She graduated from Fergus Falls High School in 1945. On Aug. 3, 1947, she married Warren S. Johnson in Fergus Falls. The Johnson family owned and operated Johnson Furniture until selling it in 1975. Lorna worked as a legal secretary for a time before and after her marriage, and later worked with Warren in the furniture store. She was a woman of grace, strength and kindness who deeply valued family. She enjoyed regular games of bridge with friends, league bowling (including a trip to Cuba for a tournament shortly before the country was closed to Americans) and travel to destinations including Alaska, Mexico, Europe, the Middle East, Southeast Asia and New Zealand. She enjoyed knitting and weaving, and was a voracious reader. She also learned to fly, and became the first woman in Fergus Falls to be licensed as a pilot. Lorna was preceded in death by the love of her life, her husband Warren in 2015. She was also preceded in death by her siblings Gladys, Elaine and Norman. She is survived by her daughters Lynn (Robert) Drechsel, of Madison, Wis., Sandra (Kim) Davis, of Alexandria, Jackie (Steve Blacker) Johnson, of Boulder, Colo., and Geri Johnson, of Fergus Falls; five grandchildren, Megan (Neil Tomson) Drechsel, of Wallingford, Penn., Sarah Drechsel, of Saint Paul, Hannah (Gurjeet) Singh, of Thornton, Colo., Benjamin Blacker of Boulder, Colo., and Sam Thieme, of Dunn Center, N.D.; one great-grandchild, Willa Drechsel Tomson, of Wallingford, Penn.; and her sister, Lois Hunt, of Sun City, Ariz. The family will hold a private ceremony, and burial will be in Oak Grove Cemetery. The Olson Funeral Home is assisting with arrangements. The family also wishes to express its deepest thanks and appreciation to all of the staff at the Ashby Living Center for the care and kindness Lorna received there, and suggests that memorials be directed to the Living Center. Online condolences may be sent to www.olsonfuneralhome.com

The family of Lorna Johnson created this Life Tributes page to make it easy to share your memories.