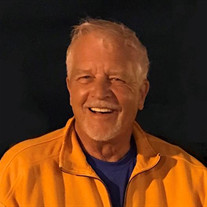 Loren Arthur Synstelien, 70, of Fergus Falls, died Wednesday, April 25, 2018, in Cape Coral, FL. Loren was born in Fergus Falls, MN, on April 18, 1948, to Arthur and Rosella (Johnson) Synstelien. He was baptized and confirmed at Trinity Lutheran Church, Ashby, MN. Loren grew up on the family dairy farm, and attended school in Ashby, graduating in 1966. He then continued his education graduating from Fergus Falls Community College in 1968 and Concordia College in 1970 with a B.A. in Psychology, followed in 1974 by a Masters in Social Work from the University of Connecticut. Loren retired as a Captain from the U.S. Air Force (8 years) and U.S. Air Force reserves (10 years) in 1988. On May 23, 1970, Loren married the love of his life, Darlene Johnson. Initially they were blessed with two children, Krista and Joel. They moved to Fergus Falls in 1978, where Loren started his counseling profession at Lakeland Mental Health Center. In 1985 he began his own practice in marriage and family counseling and started teaching at Fergus Falls Community College. 1985 also brought the addition of two children to the family. His niece and nephew, Melissa and Jonathan, were adopted by them following the tragic death of their parents. Above all else, Loren was passionate for Jesus Christ. He humbly embraced Christ’s grace and salvation. Loren knew he was flawed, and that only by Christ’s unconditional love and forgiveness was saved. He wanted his trust and belief in God to shine through in his actions and be an inspiration to others. Loren was eager about ministering and sharing faith as he walked alongside others. He lived that by counseling, teaching, serving as a Bethel Church elder, and with the Gideons in jail ministry. Loren loved having family around to walk with them and champion them in their own journeys of faith, always willing to share God’s truth. His four children, his grandchildren, countless family members, friends and colleagues were touched and inspired by his gentle example and non-judgmental guidance, which had grown out of experiences and his willingness to continue learning. He was a rock of wisdom for many, and a calm port in the worst of storms. He gave tirelessly and would accept no fanfare for the countless lives he touched. He wholeheartedly cherished hosting family and friends when they visited Florida. Loren possessed a wonderful sense of humor. He had a smile that lit up a room, and he really enjoyed laughing (especially at his own jokes and antics). Loren also enjoyed landscaping, tennis, playing cards, trivia, woodworking, traveling, making memories and remodeling projects. He approached every hobby with enthusiasm and zeal. His last day on earth he was playing tennis with friends at the Cape Coral Racquet Club when a heart attack ushered him swiftly into the presence of God. Loved ones who remain and await heavenly reunion include: Loren’s wife, Darlene of Fergus Falls; daughters, Krista (Edward Jr.) Newman of Fergus Falls, and Melissa (Kurt) Lysne of Fargo, ND; sons, Joel (Michelle) of St. Paul, MN, and Jonathan (Shannon) of Cavalier, ND; grandchildren, Shane and Anna Newman, Josella, Jozetta, Jonnae and Jesper Synstelien, Logan Schultz, Vincent Engler, Braden, Logan and Emma Lysne, Conley, Benton and Twin 1 and Twin 2 Synstelien; brothers, Stanley (Karen), Gerald (Joy), Steven (Deneise), Ronald (Dawn), Daryl (Linda) and Randy (Carma) Synstelien, all of Fergus Falls; sisters, Marlys (Timothy) Hamilton and Nancy (David) Jaecklein of Fergus Falls; as well as numerous nieces, nephews, aunts, uncles, cousins, friends and colleagues. Welcoming him on the other side, along with Christ Jesus were his parents, Arthur and Rosella; sister and brother-in-law, Janice and Michael Shelling; and infant granddaughter, Katherine May Newman. In lieu of flowers, memorials are preferred to Gideon’s International and Inspiration Point Christian Camp and Retreat Center. Visitation: 5-7 p.m. with a 6:30 p.m. prayer service on Tuesday, May 1, 2018, at Bethel Lutheran Church, Fergus Falls and will resume one hour prior to the service at the church Service: 11 a.m. Wednesday, May 2, 2018, at Bethel Lutheran Church, Fergus Falls Clergy: Pastor David Foss Interment: Oak Grove Cemetery, Fergus Falls, MN Arrangements are provided by the Olson Funeral Home in Fergus Falls Online condolences may be sent to www.OlsonFuneralHome.com

The family of Loren Arthur Synstelien created this Life Tributes page to make it easy to share your memories.