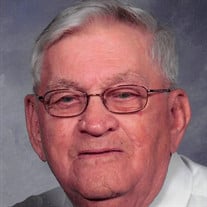 Leonard E. Erlandson, 95 a resident of Fergus Falls, Minnesota, went home to the Lord Saturday, November 17, 2018, at the Minnesota Veterans Home in Fergus Falls. Leonard was born June 8, 1923, to Adolph and Thora (Hole) Erlandson in Aastad Township, rural Fergus Falls. He was baptized and confirmed at Aastad Lutheran Church. He attended country school at District #64 through the 8th grade. Leonard helped his father and brothers on the home farm, and other neighboring farmers until he was drafted into the Army on January 27, 1945. After basic training in Camp Robinson, Arkansas, he was called to active duty on August 3, 1945. He was stationed in the Philippines transporting Japanese POW’s. His brother Victor was also stationed in the Philippines and they were able to connect with each other in Manila in September of 1945. Leonard was proud of his Military service but was never so happy as he boarded the USS General William Weigel to return home to the United States. The USS General William Weigel was part of Operation Magic Carpet landing in San Francisco, California, April 11, 1946. He often remarked that seeing the Golden Gate Bridge “took his breath away”. He finished his military service as an MP in Milwaukee, Wisconsin, being discharged September 17, 1946. He married Marion Schiermann on June 26, 1949, at Trinity Lutheran Church in Fergus Falls. He attended Dunwoody Institute in Minneapolis, Minnesota, on the GI Bill graduating on June 15, 1950. After a brief stay in Alexandria, Minnesota, working for Engen Pontiac as a mechanic, they returned back to Fergus Falls where they farmed and raised their family of seven children. Leonard served on several boards of directors for Trinity Church, Farmers Elevator, and School District #1434. He was active in French 4-H as a softball coach and chaperone for several 4-H trips. They moved to their current residence in Fergus Falls in 1982, and he became a resident of the Minnesota Veterans Home in January 2018. Proceeding him in death were his parents, Adolph and Thora; five brothers, Julian (Mary), Raymond (Doris), Victor, Milton and Goodwin (Tillie); two sisters, Marian Erlandson and Margaret (Gene) Reuss; a daughter, JoAnn Aasand and an infant grandson. Survivors include his wife of 69 years, Marion of Fergus Falls; Children; Janet Smith of Princeton and her children; Brian Smith of Bagley and Kimberly (Jim) Dans of Crookston and their children, Whitney, Nolan, Sophia, Hadley, and Jameson. Richard (Connie) of Moorhead, and their children; Stacy (Mike) Warzecha of Moorhead and their children, Jack, Jacob, Lucas, and Lia. Charles (Emily) Erlandson of Eden Prairie and their children, Drew, Lucy, and Cora. David (Kris) of Cosmos, and their children; Ben (Janna) Erlandson of Hutchinson and their children, Tyler and Conner. Andy (Melissa) Erlandson of Hutchinson and their children Rylan and Owen. Carol Eaton of Portage, MI, and her children; Tara (Ryan) Wojtowicz of St. Joseph, MI and their children Louis and Henry. Casey (David) Koch of Chicago, IL and their child, Eddie. David (Jessica) Eaton of Milwaukee, WI. Kenneth (Toni) of Henning, and their children; Stephanie (Noah) Heidorn of Hugo, Molly Erlandson of St. Cloud, Richard (Jessica) Erlandson of Hastings, NE, Emily Erlandson of Moorhead, Michael Erlandson of Perham, Darius Erlandson of Fergus Falls, Alex Erlandson of Alexandria, and Gabe Johnson of Alexandria. Duane (Karla) of Ham Lake and their children; Elle Erlandson of Ham Lake, Luke Erlandson of Madison, WI, Ryan Erlandson of Ham Lake, Aaron Erlandson of Ham Lake, and Jocelyn Erlandson of Ham Lake. Son-in-law, Kim Aasand of Anchorage, AK; and his children; Sarah Lannen of Anchorage, AK and her children, Luke Lannen and Aaron Aasand. Eric Aasand of Anchorage, AK. Sister, Bernice Lamb of Thornton, CO; sisters-in-law, Gladys (Victor) of Edina, and Arlene (Milton) of Fergus Falls; and numerous nieces and nephews. Visitation 9:00 – 11:00 AM Tuesday, November 27, 2018 at the church Service 11:00 AM Tuesday, November 27, 2018, Trinity Lutheran Church, Fergus Falls Interment Trinity – Faith Cemetery, Fergus Falls Olson Funeral Home in Fergus Falls is in charge of the arrangements. Online condolences may be sent to www.olsonfuneralhome.com

The family of Leonard E. Erlandson created this Life Tributes page to make it easy to share your memories.