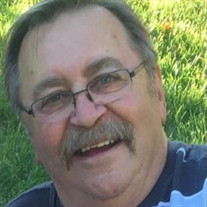 Lee Anthony Nelson, 75, passed Thursday, September 9th 2021 peacefully at his home in Brainerd, MN. He was surrounded by his loved ones as the Lord called him home. He was born on April 28th, 1946 in Fergus Falls, MN. The family moved to Elbow Lake when he was 6 years old, where he attended school. When he was 16, he moved back to Fergus Falls where he worked various jobs in construction and started his trucking career. In 1971 he married Connie K. Siemers of Wahpeton, ND where they resided until 1986. They were blessed with two children, Anthony Lee and Carissa Lynn. Early in his trucking career, he drove for International Transports and Darrell Samuelson Trucking and Golden Ring Trucking of Fergus Falls. In 1982, Lee attended Auction School in Kansas City, MO. After Auction School he worked for his father-in-law Gordon Siemers at Auctions Unlimited and Siemers Auctioneering until 1986. In the fall of 1986, he moved his family to Hastings, MN where he worked for Wayne Transport, Inc. in Inver Grove Heights, MN. In 1999, Lee and Connie moved to Crosslake, MN. He was employed by Anderson Brothers Construction for 8 years. In his spare time, he enjoyed many hobbies such as metal art and chainsaw carving; many of his carvings can be seen throughout the Brainerd Lakes area. He also enjoyed woodworking, going to garage sales and flea markets. Lee enjoyed outdoor activities such as fishing and hunting with his son, brothers and brothers-in-law. He also enjoyed spending time with his family on their pontoon on the Whitefish Chain. In 2008 he retired from Anderson Brothers Construction. After his retirement, he started a part time position with Nisswa Marine where he enjoyed delivering and picking up boats throughout the Brainerd Lakes area and beyond. He worked for Nisswa Marine until 2017 when he was diagnosed with cancer. Lee fought a courageous 4-year battle with this devastating disease. He is preceded in death by his parents, Carlton “Todd” Nelson and Elnora Nelson; brothers, Carlton “Bill” Nelson and Charles E. Nelson; sister, Carol Schindler and father-in-law, Gordon Siemers. He is survived by his wife Connie, Brainerd, MN; children, Anthony Nelson (Michelle), Pequot Lakes, MN, Carissa Simmons (Troy), Clermont, FL; his grandchildren, Anthony Lee Nelson, Jr. and Lillian Olive Nelson, whom he adored beyond measure; sister, Cheryl Klipfel (Ken), and brothers, Chris Nelson and Curt Nelson. Lee had a passion for life and was generous to a fault. He always had a joke to tell or a story to talk about while having a smile on his face. He had an everlasting sweet tooth and loved a cup of coffee and a good conversation. If he called you friend, it was a term of endearment. Visitation: one hour prior to the start of the service at the funeral home Service: 1:30 p.m. Friday, September 17, 2021, at the Olson Funeral Home in Fergus Falls. Clergy: Reverend Loren Mellum Interment: Bethlehem Cemetery, Fergus Falls, MN Arrangements are provided by the Olson Funeral Home in Fergus Falls Online condolences may be sent to www.olsonfuneralhome.com

Lee Anthony Nelson, 75, passed Thursday, September 9th 2021 peacefully at his home in Brainerd, MN. He was surrounded by his loved ones as the Lord called him home. He was born on April 28th, 1946 in Fergus Falls, MN. The family moved to Elbow... View Obituary & Service Information

The family of Lee Nelson created this Life Tributes page to make it easy to share your memories.