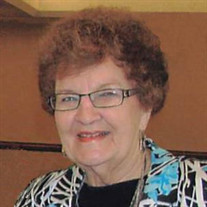 LaVonne Etten, 93, a resident of Fergus Falls, formerly of Foxhome, died Friday, December 18, 2020, at the Pioneer Cottages of Fergus Falls, MN. She was born May 24, 1927, in Dalton, the daughter of Leonard and Bessie (Clauson) Foshaug and grew up on the family farm near Ashby. Along with her four wonderful brothers they attended country school. they all seemed to truly enjoy walking or cross-country skiing to school together….and of course, it was a few miles and much of it was uphill…beautiful rolling hills, but in their case, the saying was actually true! She enjoyed getting to ride in the mail truck with her grandfather as a little girl when he would agree to have a chatty little one along for the ride. As a young lady her first job was at Woolworths in Fergus Falls. Her love for people was a perfect fit there as she so enjoyed talking about the people, she would meet at the infamous lunch counter. She met the love of her life, Ellsworth “Johnnie” Etten, at the roller-skating rink in Fergus Falls. He obviously had some pretty sweet skating skills as they were married in March of 1948. The couple made their home on the Etten farm near Foxhome and set out to perfect being a very involved farm wife, while raising four children; definitely not a small task. She and Johnnie worked hard to grow the farm and she was by his side every step of the way. They attended Foxhome Lutheran Church, (Johnnie’s parents were one of the founding couples) and being very involved in church activities was a large part of who she was. She enjoyed lifelong friendships that began and blossomed there. She was known locally as the “The Donut lady” because for years, she would spend a hot summer day at bible school making hundreds of donuts for the teachers and kids… a popular day for all! The couple knew how to enjoy life and taught their children a great work ethic but also a great “play ethic”. They enjoyed golfing and met many of their dear friends through years of league golf at Pebble Lake Golf Course. But they also got a kick out of trying other golf courses whenever the opportunity presented itself. Dancing was a true enjoyment for them and it was a treat to watch them spin around on the floor in their own version of “Dancing with the Stars”! Their children and grandchildren and now the great-grandchildren come by their love for card and board games from them, as they spent many hours with family and friends fine tuning their skills (and bragging rights). There were many card parties and their home would be filled with much laughter and joking around; that love for creating fun with family and friends lives on through their descendants. She and Johnnie enjoyed many enjoyable trips with family and friends and had so much fun when they became part of the “Snowbird” crowd in Arizona. Many happy moments were made at their cabin on Jewett Lake, and could often be seen out catching their next big walleye! LaVonne was a leader in the Riverside Rockets 4-H club and her biggest challenge was probably getting her own kids to get their projects done on the last day before the fair. Snowmobiling with neighbors, bowling, riding her bike, gardening (and keeping the pigs or cows that escaped their fences out of her garden), cooking, baking, canning were all hobbies she enjoyed but what brought her the greatest joy, her entire life, was time with family. Until her last breath, she was so very excited for each marriage that took place and every baby that arrived. You could even see her on the dance floor at the last family wedding a year ago and at 92 years old, she still had the moves. The thought of her reunited in Heaven with Johnnie is one we all treasure. She loved deeply, unconditionally, and will be dearly missed; however, “What we have once enjoyed we can never loose; all that we love deeply becomes part of us.” Shine on beautiful LaVonne. Preceding her in death, was her husband Ellsworth; her parents; two sons in law, Stan Karlgaard and Mick Schuler; three brothers, Neil, Carroll and Myron Foshaug; two sisters in law, Dorothy Foshaug and Norma Hoff, along with and her mother and father-in-law, John and Elsie Etten. Survivors include three daughters, Diane Karlgaard of Fergus Falls, Darlene Schuler of Wahpeton and Denise Stinson, of Alexandria. one son, Doug (Ann) Etten of Dalton; 13 grandchildren; 27 great-grandchildren; a brother Leland (Caroyle) Foshaug of Alexandria, along with her sister-in-law, Dory Foshaug, of Sun City, AZ. A private family service will be held, with the anticipation of a public event in the months to come. Please refer to her tribute wall for a recording of the service. Interment will be in the Knollwood Cemetery Fergus Falls. Arrangements are with the Olson Funeral Home in Fergus Falls. Online condolences may be sent to www.olsonfuneralhome.com

LaVonne Etten, 93, a resident of Fergus Falls, formerly of Foxhome, died Friday, December 18, 2020, at the Pioneer Cottages of Fergus Falls, MN. She was born May 24, 1927, in Dalton, the daughter of Leonard and Bessie (Clauson) Foshaug and... View Obituary & Service Information

The family of LaVonne B. Etten created this Life Tributes page to make it easy to share your memories.

LaVonne Etten, 93, a resident of Fergus Falls, formerly of Foxhome,...