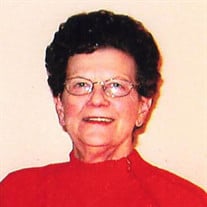 LaVon (Hokanson) Knutson, 84, of Fergus Falls, died unexpectedly Wednesday, March 24, 2021, at Sanford in Fargo. LaVon was born July 29, 1936, to Oscar and Mabel (Rosenquist) Hokanson in Clitherall Township. She attended Rothsay School, graduating in 1954. The summer of 1954, after graduation she worked as a dental assistant and receptionist for Eastman Carlson. She was also the Otter Tail County Dairy Princess that same summer. After some courting, she met her future husband that summer as well. On June 17, 1956, she married Robert Knutson at Hedemarken Lutheran Church. The couple resided in Fergus Falls. Through the years, she was employed at Rosenblatt’s, King Machine, Lake Region Hospital, and the Fergus Falls Regional Treatment Center where she retired in 2005. She was a member of Zion Lutheran Church in Fergus Falls. She belonged to Homemakers Club and Church Circle. She enjoyed fishing with her son, Tim and grandsons, going for car rides but getting an ice cream cone first. She was in a bowling league for King Machine and played softball for several years. As a kid she lived on the farm and was involved in 4-H. Preceding her in death were her parents; her husband, Bob; son, Tim; sister, Marjorie Ortman; brother, Austin Hokanson, and several brothers and sisters-in-law. LaVon is survived by her daughters, Mary (David) Dickey of Wahpeton, ND and Nancy (Mark) Schmidt of Bullard, TX; eight grandchildren, Jeremy Jesse, and Jay Dickey, Charles, Cristen (Blaine), and Cory (Danielle) Schmidt, Joshua (Erin) and Hannah Knutson; great-grandchildren, Abby, Ava, Aubrey, Austin, Beckett, and Laken, and many nieces and nephews. Also surviving are Kim Knutson and Connie Weinkauf, mothers of Joshua and Hannah Knutson, and two sisters-in-law, Linda Knutson and Louise Hokanson. A private family graveside service will be held at a later date. Interment: Oak Grove Cemetery, Fergus Falls, MN Arrangements are provided by the Olson Funeral Home in Fergus Falls. Online condolences may be sent to www.olsonfuneralhome.com

The family of LaVon Knutson created this Life Tributes page to make it easy to share your memories.