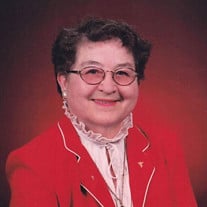 LaVina Miller, 98, of Fergus Falls, died Wednesday, January 19, 2022, at LB Broen Home in Fergus Falls. LaVina was born on November 14, 1923, in Star Lake Township to Clarence R. and Ida A. (Lange) Ott. She grew up and attended school at ISD# 129 all in Star Lake Township. During the 1940’s LaVina worked at the Star Lake Store. On February 26th, 1947 she married Carl Edwin Swanson at the United Methodist Church Parsonage in Perham. Edwin died in July of 1979. For several years she was employed at the Pelican Valley Nursing Home and the Broen Home in Fergus Falls. On September 21, 1986, she married Glenn W. Miller at Our Redeemer Lutheran Church in Pelican Rapids. Glenn was a pattern maker for John Deere. Glenn died on July 24th, 2000. For all her years LaVina lived and worked on the farm in Star Lake Township. LaVina was a member of United Methodist Church of Dent. She loved to travel and was an avid bell collector and rock collector. LaVina gave her children the love of nature, travel, animals, plants, music, books, and the Love of God She was preceded in death by her parents; both husbands and youngest son, Allen. LaVina is survived by her children, Leo and Shari (Monson) Swanson of Perham; Jerry and Sue (Perezyk) Swanson of Perham and Shirley and Don Nelson of Glencoe, MN; five grandchildren, and 11 great-grandchildren. Visitation: 10:00 a.m. – 11:00 a.m. Saturday, February 12, 2022, at the Olson Funeral in Fergus Falls, MN. Funeral: 2:00 p.m. Saturday, February 12, 2022, at the United Methodist Church in Dent with a visitation starting at 1:00 p.m. Clergy: Reverend Amy Strom Burial: Pleasant Hill Cemetery near Dent, MN Arrangements provided by the Olson Funeral Home in Fergus Falls. Online condolences may be sent to www.olsonfuneralhome.com

The family of LaVina Miller created this Life Tributes page to make it easy to share your memories.