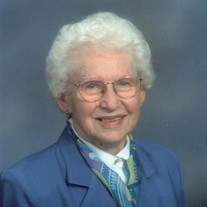 Lavida Evelyn Ness joined her husband in heaven on Thursday, July 16, 2020, at the age of 100. She passed away peacefully at Lifesong Residence in Fergus Falls, where she received loving care for the past four and a half years. The first child of Arthur and Marie (Turman) Dess, Lavida was born on the family farm north of Underwood, MN on May 28, 1920. Later, she was joined by her two sisters, Ivy and Violet, and her half-brother, Orvin Anderson. During her childhood, Lavida attended Barnhard School. She then continued on to high school, graduating from Underwood High School. Her passion for education drove Lavida to earn her teacher’s certificate from Moorhead State Teachers College after two years of study. From there, she became a dedicated educator for children in the many country schools in the area for four years. On October 1, 1944, Lavida and James O. Ness were united in marriage. Together, the couple worked the Ness family farm near Underwood. They raised four children, a son and three daughters. As their children grew, Lavida began working in a fabric store located in Fergus Falls. Eventually, she worked as a teacher’s aide at the Underwood School. Throughout their loving marriage, the couple were active participants at Sverdrup Lutheran Church. They shared in the joy of becoming grandparents, and in 1986 Lavida and James retired from farming, living contentedly on the farm until James’ death ten years later. Lavida moved from the farm into Underwood in 2000. There, she created a beautiful garden, continued her love of reading, crocheting and sewing, and never ceased to fill her home with love and wonderful memories for her family. She loved to cook, bake, and could often be found singing and humming in the kitchen. Lavida’s beloved past times live on through her children, grandchildren, and great-grandchildren. Lavida was preceded in death by her husband, James in 1996; sisters, Violet Rollag and Ivy Saathoff, and grandson, Jesse Rund. She is survived by her children, David (Dianna) Ness of Trimble, MO, Kathi (Dick) Thompson of Sierra Vista, AZ, Joanne Ness (Scott Samson) of Fergus Falls, and Sylvia (Eric) Greene of Fargo, ND; six grandchildren, Matthew, Rustin, Julie, Allison, Katlin, and Megan, and seven great-grandchildren. She will be forever loved, missed, and in our hearts. There will be a private family service held. Public Graveside Service: 2:15 p.m., Friday, July 24, 2020, at Sverdrup Lutheran Cemetery, Underwood, Minnesota Clergy: Chaplain David Strom Interment: Sverdrup Lutheran Cemetery, Underwood, Minnesota Arrangements are provided by the Olson Funeral Home in Fergus Falls. Online condolences may be sent to www.olsonfuneralhome.com

Lavida Evelyn Ness joined her husband in heaven on Thursday, July 16, 2020, at the age of 100. She passed away peacefully at Lifesong Residence in Fergus Falls, where she received loving care for the past four and a half years. The first child... View Obituary & Service Information

The family of Lavida Ness created this Life Tributes page to make it easy to share your memories.

Lavida Evelyn Ness joined her husband in heaven on Thursday,...