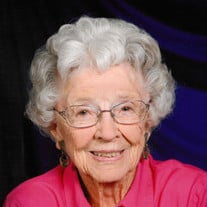 Laverne H. Morstad, age 101, a resident of Fergus Falls, passed away peacefully on Friday, October 11, 2019 at PioneerCare in Fergus Falls. Laverne was born March 30, 1918 in Otter Tail County, Minnesota, the daughter of Alfred and Irene (Zimmerman) Anderson. She was baptized and confirmed at the Hamar Lutheran Church in Rothsay, MN. She attended rural school at District No. 127 and high school in Fergus Falls graduating with honors in 1935. Following high school, she attended the Otter Tail School of Business in Fergus Falls. She was employed in the County Extension Office until 1940, when she was united in marriage to Neal Morstad. Their wedding took place October 6, 1940 at First Lutheran Church in Fergus Falls, where they continued to be lifelong members. She and Neal enjoyed 74 years together until his passing in December of 2014. During World War II, while Neal was serving in the Navy, the couple lived in California, where Laverne worked as an accountant in offices in both San Diego and San Francisco. Following the end of the war, they returned home to Fergus Falls, settling in to the community and beginning to raise their family. Laverne was involved in various activities, including women’s church groups, Quilting Circle, League of Women Voters, VFW Auxiliary, and serving as a board member of the Otter Tail County Historical Society. She was a huge supporter of Fergus Falls, loved the beautiful city parks and lakes, the tree lined streets, and the best of small-town life. She was passionate about the community, oftentimes writing letters to the editor, showcasing the wonderful features of her hometown and her hopes for a bright future capitalizing on its natural gifts. In their retirement years she and Neal spent winters in Arizona where they enjoyed ballroom dancing, entertaining, and playing bridge with friends. They also enjoyed traveling, particularly visiting their family homes in Norway, as well as taking several other interesting trips throughout the United States. Laverne loved history, feeling that it was not only interesting but also offered valuable lessons for each generation. She was an avid reader, a keen observer of current events, and full of curiosity. One of her country school teachers suggested the only way to gain knowledge was to ask a question, and that stayed with her throughout her lifetime of learning. Laverne’s greatest joy was her family. When asked to describe the role of wife and mother, she would proudly refer to herself as a “domestic engineer.” She was a wonderful cook and enjoyed entertaining family and friends in a welcoming home. Laverne was also a real sports fan, spending many years either going to games, watching on television, or listening on the radio. Her grandchildren were amazed at her knowledge of sports, and enjoyed visiting with her about her favorite teams. Laverne spent her last years as a resident of Pioneer Pointe where she met many new friends. She will be remembered for her positive outlook on life, love of family and service to others. Preceding her in death were her husband, Neal; her parents; sisters, Adelore, Avis and Audrey; brothers, Alden, Irvin, Russell, Darrell and Dennis Anderson. She is survived by her children; John, of Mesa, AZ; Tom (Barbara), of Gold Canyon, AZ; Jim (Tracy), of Fergus Falls; grandchildren, Pat (Trista) Morstad, Matt (Lauren) Morstad, Alex Morstad (special friend Christina Warner), Erin (Josh) Subialka and Mike Morstad; great-grandchildren, Patrick, Marea, Will, Max, Mayson and Scarlet Morstad; a brother, Merle Anderson; and sisters-in-law, Beverly Anderson, Jane Anderson and Bonnie Anderson, as well as many nieces, nephews and friends. In lieu of flowers, memorials can be given to First Lutheran Church, Fergus Falls, the Otter Tail County Historical Society, or LB Hospice in Fergus Falls. Visitation: 9:30-11:00 a.m. at the Olson Funeral Home in Fergus Falls. Service: 11:00 a.m. on Saturday, October 19, 2019 at the Olson Funeral Home Chapel in Fergus Falls Clergy: Chaplain David Strom Interment: Oak Grove Cemetery Arrangements are provided by the Olson Funeral Home of Fergus Falls. Online condolences may be sent to www.olsonfuneralhome.com

The family of Laverne Harriet Morstad created this Life Tributes page to make it easy to share your memories.