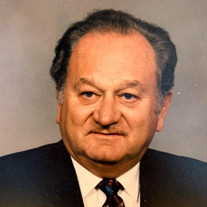 LaVern Duane Thompson, 87, of Fergus Falls, died Monday, September 20, 2021, at PioneerCare from congestive heart failure. He was happy to be on the same wing as his wife Marilyn, at PioneerCare, where she still resides. LaVern was born on June 7, 1934 at home in St. Olaf Township, on the original home place which is now known as the Little Place. His parents were Alfred and Myrtle (Lysne) Thompson. He attended grade school at the country school of District 9 and graduated from Ashby High School in 1953. He played on the school football and basketball team and was the class Vice President one year. On July 17, 1955 he married Marilyn Anne Lemke in Underwood, MN. There were very few things that they did not do together from that point on. After they married, they had three children: Cynthia (Cindy), Carey and Dawn. They lived all their married life in Fergus Falls. The first summer after graduation he started working with Swedberg Nursery doing landscaping and tree trimming. In the fall of 1953, he was hired by the Fergus Falls State Hospital, eventually known as the Regional Treatment Center (RTC). He started as a hospital service technician who worked with the mentally ill. A few years later, he started a new job as a social worker in the Drug Dependency Rehabilitation Center at the RTC. Eventually he became a dependency counselor, and then moved up to supervisor finishing his career at the age of 57 when he retired. He loved helping all those struggling during his many years there. In 1998 LaVern and Marilyn bought a retirement home in Tucson, AZ after spending several years camping in their 5th wheel camper during the winter months. They made wonderful friends there and have passed their love for Arizona down to their children. When it came to recreation, LaVern loved to hunt ducks and deer and did so for many years. He taught his son, Carey, to hunt and they spent many seasons hunting ducks at the Little Place. He also liked to fish during his younger years. Upon retirement, he took up building wood projects. Many of his family members own a special project made just for them. LaVern’s main passion in life was his strong Christian faith. After being diagnosed with a heart murmur in his early 20’s, he asked God to heal him and promised to devote his life to Christ if he did. Shortly thereafter, his heart murmur disappeared and he lived true to his promise his whole life. Kvam Church was the church of his youth and although he lived 20 miles away, he always drove his own family there for church and many, many other activities. He was on the church council for several years, attended many bible study groups, sang in the choir and stayed involved until his later years. He was also very active for many years in the Gideon’s and even took a trip to Singapore and Indonesia to give away Gideon Bibles. He also took part in the Promise Keeper movement. He hoped to be remembered for his life of faith over everything else. Preceding LaVern in death were his parents, Alfred and Myrtle (Lysne) Thompson; sister, Violet Nelson; uncle, Melvin Thompson and nephew, Robert “Bob” Spangler. He is survived by his wife, Marilyn of Fergus Falls; his children, Cynthia (David) Wessels of Waconia, Dawn (Art) Woods of West Des Moines, IA, and Carey (Marcia) Thompson of Fergus Falls; niece, Marlys (Nelson) Spangler of Ashby; grandchildren, Justin and Jennifer Tryba, Chad and Ashlei Wessels, Alan Wessels, Adam Wessels, Melissa Woods, Michelle Woods, Trisha and Dylan Cirks, Molly Thompson and Scott Olson, Heather and Aaron Ebbighausen, Carissa Sjolie and Chuck Ryan, and Andy Sjolie; and 20 great grandchildren. A special thanks is extended to Mill Street Residence for the care and compassion shown to LaVern during the last year in his assisted living apartment. He enjoyed and appreciated the amazing staff there. Much appreciation also to PioneerCare for all you provided LaVern during his toughest months of his life. The family would ask that all memorials be directed to Kvam Free Lutheran Church in c/o Pennies from Heaven. Visitation: One hour prior to the start of the service at the church on Friday. Memorial Service: 1:00 p.m., Friday, September 24, 2021, at Zion-Sarpsborg Free Lutheran Church in Dalton. Clergy: Reverend Mark Johnson Interment: Kvam Cemetery, rural Dalton, MN Arrangements are provided by the Olson Funeral Home in Fergus Falls. Online condolences may be sent to www.olsonfuneralhome.com

LaVern Duane Thompson, 87, of Fergus Falls, died Monday, September 20, 2021, at PioneerCare from congestive heart failure. He was happy to be on the same wing as his wife Marilyn, at PioneerCare, where she still resides. LaVern was born on... View Obituary & Service Information

The family of LaVern Thompson created this Life Tributes page to make it easy to share your memories.