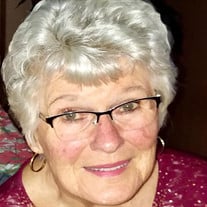 LaVay Fern Swanson, age 80, of Underwood, died Tuesday, June 25, 2019, at Woodland Lodge in Fergus Falls. LaVay was born on January 23, 1939, to Roy and Florence (Onstad) Leitch in Fergus Falls. She attended Underwood High School, graduating in 1957. On July 28, 1962, she married the love of her life Ralph Swanson, in Seattle, WA. In her younger years, LaVay excelled in the restaurant industry, waitressing at various restaurants including the Viking in Fergus Falls, Country Kitchen and founding and running Buck’s Corral, which she and Ralph opened in Woodinville, WA. She and Ralph moved to her hometown of Underwood, where they successfully operated R & L’s Family Restaurant for several years, which is where they made lifelong friends including Alice, Vicki, Darlene (Chief), and Mary (Flossie). After her husband Ralph passed, she spent years working for the State of Minnesota, first at the Regional Treatment Center in Fergus Falls in the housekeeping department and subsequently retiring from St. Cloud State University. Throughout the years, in her spare time, she enjoyed housekeeping for several dear families in the area. LaVay’s love to her family and friends was expressed with her baking and cooking. The favorites were rhubarb cake, chicken noodle soup, Oreo salad, apple pie, and the annual highlight was lutefisk. She loved watching her grandchildren in all of the activities they participated in; she was their number 1 fan and always made it a priority to attend all of their activities. Her family was her priority, pride, and joy. She inherited a love for flowers from her mother, Florence, and her home and yard reflected that. Everyone knew of her great love of everything Elvis. She and her husband were able to see Elvis live in Las Vegas in 1970. In 2015, LaVay was re-diagnosed with cancer. Her dream of visiting Graceland was realized when her daughters, Julie and Darla and her granddaughter, Erin took her on a road trip to Memphis, TN in 2015. She fought until the very end with dignity and class, never complaining and always thinking of others who had health issues, before herself. She always had a smile on her face and was a bright light to all who knew her. She will be deeply missed. She is preceded in death by her husband Ralph, who passed in 1982; parents Roy and Florence Leitch and a brother Gary Leitch. LaVay is survived by her children, Julie (Paul) Stadtler of Fergus Falls, Darla (Bob) Miller of Elbow Lake, Daryl Swanson of Underwood; grandchildren, Shawn Andersen, Daniel Andersen, Erin Andersen, Candice Andersen Neely, Crystal (Blair) Herman, Beau Fabian, Buzz Miller, Zane Swanson, Zoey Swanson; great-grandchildren, Gianna Herman and Trent Herman; sister-in-law and sister in life Susie Leitch; nephews, Lance, Brett, and Shawn Leitch, who were so special to her. Visitation: One hour prior to service at Olson Funeral Home Service: 10:30 AM on Saturday, June 29, 2019, at Olson Funeral Home in Fergus Falls Clergy: Reverend Mike Voorhees Interment: Tingvold Cemetery, rural Underwood, MN Online condolences may be sent to www.olsonfuneralhome.com

The family of LaVay Fern Swanson created this Life Tributes page to make it easy to share your memories.