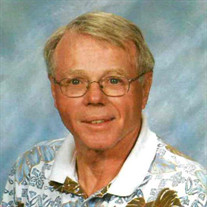 Long-time Fergus Falls teacher Larry Zenner, 83, passed away suddenly in Frisco, TX on December 16, 2021. He is survived by his daughter Alyssa (Shawn) Maxson of Frisco, Texas, and his son Tyler (Genna) Zenner of Madison, Wisconsin, and his grandchildren Braden, Ashtyn and Ellery of TX, and Jack, Soren, Carsten and Griffin of WI. Larry was born in Noonan, ND on January 23, 1938, to Kenneth and Evelyn Zenner and graduated from high school in Arthur, ND. He received his bachelors and master’s degrees from UND and has remained a lifelong fan of their hockey team. While he was at UND, he met the love of his life, Ellen Thompson, and they married in June of 1961 and went on to celebrate 42 years together. After living in various places that included a couple of years in the US Army, Larry and Ellen moved to Fergus in 1967, where he worked for over 35 years as an educator. He was a beloved teacher and guidance counselor whose sense of humor and irreverence amused many, but not quite all. Throughout his life, Larry valued service to others. He was a distinguished Fellow of Sunrise Rotary and also volunteered with Big Brothers/Big Sisters and Relay for Life. He was a member of Grace United Methodist Church, and was on their board of Trustees and volunteered with UMCorps. He read to the blind over the radio until well into his 70s. He also donated over 8 gallons of blood to American Red Cross. Larry loved to sing, and he performed in many choirs and musicals over the years. He could also be heard singing the national anthem from the stands at Otters sporting events. Even if he didn’t have a microphone, people would always turn around and comment on his wonderful voice. He valued all Otter athletics, and made it a point to attend at least one event for every sport each year; and he would make it to all the home basketball, football, and hockey games. He was the announcer for boys and girls swimming for over a decade. He attended every one of his children’s school athletic events, concerts or performances even if it required traveling. He enjoyed reading, traveling, fishing and golfing, even if he lost a golf club in a tree on occasion. He was gregarious and loved to chat with neighbors and strangers alike. The last years of Larry’s life were afflicted by frontotemporal dementia (FTD), which robbed him of some of his sparkle. But even on his last conscious day he was singing carols and lighting up people’s lives. He was preceded in death by his wife, Ellen (Thompson) Zenner, his sister Lorna Young, and his parents. He is survived by his brother-in-law Dick Young, and in-laws on Ellen’s side: Mavis and Glen Thompson, and Fern and Harris Bailey. He has many nieces and nephews, including Jeff (Cyndi) Young of Fergus Falls.  Visitation: 5:00 p.m. to 7:00 p.m. Thursday, January 6, 2022 at Olson Funeral Home in Fergus Falls, with a prayer service at 6:30 p.m. Visitation will resume one-hour prior to the service at church. Service: 10:00 a.m. Friday, January 7, 2022 at Grace United Methodist Church in Fergus Falls Clergy: Reverend Lee Kantonen Military Participation: Fergus Falls V.F.W. Post 612 and American Legion Post 30 Interment: Oak Grove Cemetery, Fergus Falls, MN Arrangements are provided by the Olson Funeral Home in Fergus Falls. Online condolences may be sent to www.olsonfuneralhome.com

Long-time Fergus Falls teacher Larry Zenner, 83, passed away suddenly in Frisco, TX on December 16, 2021. He is survived by his daughter Alyssa (Shawn) Maxson of Frisco, Texas, and his son Tyler (Genna) Zenner of Madison, Wisconsin, and his... View Obituary & Service Information

The family of Larry Zenner created this Life Tributes page to make it easy to share your memories.