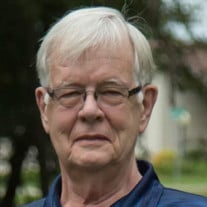 Larry Aldus Stundahl, 73, of Fergus Falls, MN passed away Wednesday, June 23, 2021, at his home after a courageous battle with cancer. Larry was born April 29, 1948 in Ada, MN to Elster “Roy” and Joyce (Underdahl) Stundahl. He grew up on their family farm outside of Twin Valley, MN and was baptized and confirmed at Wild Rice Country Lutheran Church. In 1966 he graduated from Twin Valley High School. After high school he worked numerous jobs. In 1971 he worked for GTA Grain Elevator in Twin Valley and in 1972 Felton Farmers Elevator (Borup Elevator). On November 12, 1971, Larry married the love of his life Harriet Faye Sip at Grace Lutheran Church in Ada, MN. Together they were blessed with four children. In 1985 the family started their own business, Bahama Gold Studio, which is still open today. In 1986 they moved to Fergus Falls, MN and Larry worked at Sidco Sunflower Plant in Breckenridge, MN. In 1990 he started working for Metz Bakery (Bimbo Bakery) in Fergus Falls where, after 29 years he retired in September of 2020. Larry enjoyed spending his free time on the lake with his family. Fond memories of him driving his speedboat whipping them around on the innertube. He took great pride in his lawn care and loved going to his grandkid’s events. He was an avid Minnesota Twins fan and enjoyed going to games at any opportunity. He cheered on the Minnesota Vikings through the years, even when they weren’t winning. With his tremendous sweet tooth, he couldn’t resist Harriet’s homemade cookies with a heaping bowl of ice cream. He was a hard-working family man. Larry is survived by his wife of 49 years, Harriet; four children, Lonny Stundahl (Linnea Henry), Laramy (Teresa) Stundahl, Lynae (Logan) Solberg, Laith (Tiffany) Stundahl; thirteen grandchildren, Brandon, Brittany, Chase, Dawson, and Ty, Teanna, Jacob, and Cheyanne, Reed and Breidyn, Levi, Ryker, and Briella; great-grandchildren, Landon, Bennet, and Bryson, and baby boy Quitmeyer due in September; siblings, Karen Meland, Roger (Donna) Stundahl, and Jodi Stundahl; step-mother, Sharon Stundahl, and numerous nieces and nephews. Preceding him in death were his great-granddaughter, Faye Lynn Quitmeyer; his parents, Elster “Roy” and Joyce Stundahl; grandparents, Art and Freida Underdahl and Lars and Bella Stundahl. Visitation: One-hour prior to the service at the funeral home. Service: 1:00 p.m. Tuesday, July 6, 2021, at the Olson Funeral Chapel in Fergus Falls Clergy: Reverend Clay Mitchell Arrangements are provided by the Olson Funeral Home in Fergus Falls. Online condolences may be sent to www.olsonfuneralhome.com

The family of Larry Stundahl created this Life Tributes page to make it easy to share your memories.