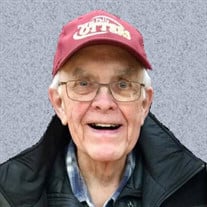 Larry C. Fjeld, 83, a resident of Fergus Falls, died Saturday, April 6, 2019, at PioneerCare. Larry was born March 2, 1936, in Fergus Falls to Ernest and June (Nelson) Fjeld. He attended school in Fergus Falls and graduated in 1954. On November 30, 1963, he was united in marriage to Gerry Kenyon in Fergus Falls where they lived. As a young boy, Larry began delivering the Fergus Falls Daily Journal along Fir Avenue; during his teenage years he worked at the Fergus Bowling Center, for Orville Ross, setting pins and working the counter. After graduation, he worked at Fergus Falls Ready Mix and then Central States Construction. On December 23, 1968, Larry began working for Ottertail Power Company at Hoot Lake Plant in the coal yard and retired July 1, 1999, as chief operator. For 22 years he was a volunteer for the Fergus Falls Fire Department. At age 16, Larry started bowling and was proud of being an active member of the adult bowling leagues for 65 years. He served as City Association secretary and as a league secretary for several leagues. He was also a Minnesota State Association Director for many years. He was a master of the fine touch of bowling and understood all aspects of the game. Larry loved the competition of bowling, but what he loved even more were the friendships and memories that were created and that bowling is a “lifetime sport and everyone gets to play.” Larry was a sports fan and enjoyed cheering on the Minnesota Twins, Gophers and especially the Fergus Falls Otters, being a proud Papa (Buster), watching Rachel and Matthew participate in their various sports through the years. He enjoyed Snicker Bars and everything good as long as it was chocolate. Larry is a past member of the Elks Lodge 1093 and Eagles Aerie 2339 where he was involved with bowling activities both locally and state wide. He was also a past member of Pebble Lake Golf Club. He was a handy man and proud of his meticulously organized tool bench. He also loved to grill and one of his specialties was his delicious bacon cheeseburgers. Larry was an early morning riser and enjoyed making his “morning circuit” which included stops to pick up the USA Today newspaper, Barker Insurance, Northern Aire Lanes and on Saturday mornings, Nelson Auto Center. He loved to visit, enjoy a cup of coffee, good humor and conversation with his friends. Larry was preceded in death by his parents, Ernest (Slim) and June Fjeld; brother, Bernarr and father and mother in-law, Neil and Gladys Kenyon. He is survived by his wife, Gerry of Fergus Falls; daughter, Dacia (Todd) Johnson of Fergus Falls; son, Dan of Andover; grandchildren, Rachel and Matthew Johnson and Alicia Abernathy; the Nelson and Field cousins; special family friends, Eric and Luke Loeffler and Hooterville co-workers. Time of Remembrance: 1:00 PM – 4:00 PM, Sunday, April 14, 2019 at Olson Funeral Home, Fergus Falls In lieu of flowers, memorials may be directed to Lake Region Cancer Center or donor’s choice. Arrangements are provided by the Olson Funeral Home in Fergus Falls.

The family of Larry Fjeld created this Life Tributes page to make it easy to share your memories.