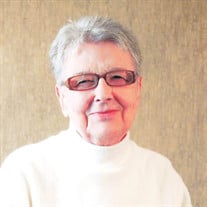 LaDonna Ruth Olson passed away Thursday, March 12, 2020, at the age of 92 at Park Gardens in Fergus Falls, under the care of LB Hospice following a stroke. LaDonna was born December 23, 1927, to Otto and Ruth (Dull) Villwock in Wadena. Both her mother and twin brother died from complications following the birth. LaDonna grew up under the care of her maternal grandparents in Hewitt. After graduation from high school in Hewitt, she attended beauty school in Minneapolis. Following beauty school graduation, she worked in Wadena, where she met and married William Zosel. They relocated to Breckenridge and to this union was born a set of identical twin boys. LaDonna successfully owned and operated LaDonna’s Beauty Shop in Breckenridge while raising her two sons. On January 21, 1960, she married Robert (Bob) A. Olson from Wahpeton, ND. LaDonna’s pride and joy were her two sons, her beauty shop customers, and her grandchildren. She was known for integrity, patience, gentleness, kindness, a good listener, and made awesome apple bars! During her boys’ school years, Friday evenings always found her in the kitchen making a large pan of apple bars for her sons and any number of friends that they happened to bring home. In 1976 Bob and LaDonna purchased a small cabin on the Ottertail River where they spent many summers fishing and enjoying the river view. Bob passed away in August of 2000. LaDonna continued to enjoy cottage living until she relocated to Park Gardens in the Fall of 2006. LaDonna was a woman of faith in the Lord Jesus Christ and was looking forward to meeting her Savior. She also expressed excitement regarding finally getting to meet her mother and brother in heaven. She was preceded in death by her parents; grandparents; two brothers; two nephews, and her husband Robert. LaDonna is survived by her two sons, Mark (Sarah) Zosel or North Branch and Paul (Esther) Zosel of Fergus Falls; grandchildren, Josh (Andrea) Zosel of Fargo, Jason (Leah) Zosel of Fergus Falls, Martha Zosel of Stacey, and Anna (Jay) Kam of Stacey; six great-grandchildren, Johann, Micah, Amelia, and Layla Zosel and Zeya and Niyah Kam; one niece, Cheryl Lohmeyer of Illinois, and numerous cousins. A private family memorial will be held per LaDonna’s request. Assistance provided by the Olson Funeral Home in Fergus Falls. Online condolences may be sent to www.olsonfuneralhome.com

LaDonna Ruth Olson passed away Thursday, March 12, 2020, at the age of 92 at Park Gardens in Fergus Falls, under the care of LB Hospice following a stroke. LaDonna was born December 23, 1927, to Otto and Ruth (Dull) Villwock in Wadena. Both... View Obituary & Service Information

The family of LaDonna Olson created this Life Tributes page to make it easy to share your memories.