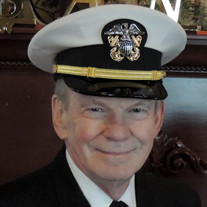 Kurt Gustin, 72, of Fergus Falls, died Sunday, November 21, 2021, at the Minnesota Veteran’s Home in Fergus Falls. Kurt was born January 22, 1949, in Fargo, ND to Albert and Stella (Nudell) Gustin. He graduated in 1966 from Central Cass High School in Casselton, ND. He joined the United States Navy March 21, 1967. He attended boot camp and Hospital Corps School in San Diego, CA. He was stationed at Portsmouth Naval Hospital in Portsmouth, VA until his deployment to Vietnam in May of 1969. Then he was stationed at Naval Support Activity hospital in Danang, Vietnam until his discharge in April of 1970. In June of 1970, he joined the United States Naval Reserve (USNR). During his service he served as Career Counsellor and was advanced to Chief Petty Officer. On April 8, 1972 he was united in marriage to Pamela Augustin. They resided in West Fargo until 1981 when they moved to Fergus Falls, MN. They had two sons, Kristopher and Korbin, and adopted daughter, Kacinda. He attended St. Luke’s School of Nursing in 1978 graduating with Honors in 1980. He then attended MSUM and received his Bachelor of Science Degree in Nursing in 1983. He was commissioned as a Nurse Corps Officer in the USNR in 1983. He continued to serve in the USNR until his retirement in 2001. During his service, he served as Officer in Charge of the medical unit at the Naval Reserve Center in Fargo, ND. He served a total of 34-years in the United States Navy. He was a life member of the VFW, Vietnam Veterans of America, and the American Legion and Fleet Reserve Association. He was employed at Lake Region Healthcare in Fergus Falls, MN for 34-years. During those years he was a member of the Minnesota Nurses Association serving on the Commission of Nursing Practice and the Board of Directors. Kurt was a member of First Lutheran Church, serving many years on the church council. He was an avid reader and Duke Fan, and enjoyed playing games with his grandchildren. After being blessed with four granddaughters, he especially enjoyed his only grandson. Preceding him in death were his grandparents; his parents, and daughter-in-law, Elyce Gustin. He is survived by his wife, Pamela; sons, Kristopher (Wendy) and Korbin; daughter, Kacinda; five grandchildren, Emilee Gustin, Hailey Formo, Isabel Gustin, Olivia Gustin, and Zane Gustin; brother, Kenneth Gustin; sister, Kay Exner, and a niece and nephew, and several cousins. Service: 1:00 p.m. Thursday, December 9, 2021, at First Lutheran Church in Fergus Falls, with visitation one-hour prior to the service at the church. Clergy: Reverend Stan Satre Interment: 1:00 p.m. Friday, December 10, 2021, at the Fargo National Cemetery, Harwood, ND, with Military Honors by the Fargo-Moorhead Honor Guard Arrangements are provided by the Olson Funeral Home in Fergus Falls Online condolences may be sent to www.olsonfuneralhome.com

The family of Kurt Gustin created this Life Tributes page to make it easy to share your memories.