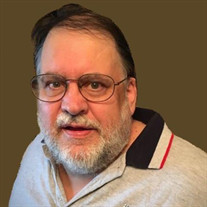 Kevin Lee Livingood, 67, of Fergus Falls, died peacefully Wednesday morning, December 30, 2020, at the Fergus Falls Minnesota Veterans Home under the care of LB Hospice and V.A. nursing staff. Kevin was born in Pelican Rapids on September 26, 1953 to Leonard and Alfryda Livingood of rural Callaway, MN. His first 6 years of schooling were at a country school in Richwood, MN. He graduated from Detroit Lakes High School in 1972. Kevin wore many hats in his lifetime. He enlisted in the navy and received his training at San Diego, California after which he spent 4 years in Guam as a Specialty Storekeeper (SK). He returned to the United States in 1977. He studied business at Faribault Technical School and accounting at Minnesota State University Moorhead. After his marriage to Lori Jo Lamb on June 19, 1982, they moved to Beaumont, TX for 2 years where Kevin worked as a cable installer/repairman. Wanting to be closer to his home place, they moved to Fargo where Kevin worked in inventory and was a stockman at American Wheel and Brake. Stocking shelves and cashiering at Walmart from 2001 to 2013, Kevin’s personality and sense of humor enlightened the days for customers and colleagues. Kevin was a huge sports fan and supported his favorite national and local teams - Go Bison! Throughout his life he enjoyed golfing, bowling, attending sporting events, and collecting sports memorabilia. He especially enjoyed the role of amateur weather man, keeping his family aware of any storms on the way. Kevin had an infectious laugh, a joyful personality, and most importantly had accepted Jesus into his life. Kevin lost the love of his life, Lori, in December of 2010. With failing health, Kevin entered the Fergus Falls Veterans Home in July of 2017. While at the Veterans Home, he was recognized by staff and residents for the unique hats he wore. He attended many V.A. outings, joined the choir, was a regular at the Bingo table and enjoyed playing Whist. Kevin is survived by his brother Kelly (Jane) Livingood of Faribault, MN; sisters Kathy (David) Aarhus of Fergus Falls, MN, Karen (Mike) Lindstrom of Coon Rapids, MN, and Kristie Livingood of Minnetonka, MN; 3 nephews, James Livingood, John and Ryan Aarhus; and mother-in-law Corrine Lamb of Fargo. Kevin was preceded in death by his beloved wife, Lori; parents, Leonard and Alfryda Livingood; nephew, Marcus Livingood; and father-in-law Bradley Lamb. A celebration of life for both Kevin and his mother, Alfryda, will be held on Saturday, August 21, 2021, at 2:00 p.m. with visitation one-hour prior to the service at Bakke Lutheran Church, 27492 Co Hwy 32, Detroit Lakes, MN 56501. A private burial for Kevin will be at Springvale Cemetery, Fargo, ND, the following day. The family is especially grateful to the Veterans Home for the outstanding care provided to Kevin. Arrangements are provided by the Olson Funeral Home in Fergus Falls. Online condolences may be sent to www.olsonfuneralhome.com

The family of Kevin Livingood created this Life Tributes page to make it easy to share your memories.