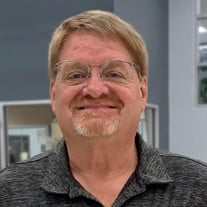 Kevin Wayne Knapp, 64, of Fergus Falls, passed away at Essentia Health in Fargo, ND on Tuesday, December 21, 2021 surrounded by his family. Kevin was born in Lincoln, NE to Robert Sr. and Marjorie (Stiverson) Knapp on January 20, 1957. He met his wife, Connie O’Connor, as they worked together at the Lincoln Journal Star while attending college at the University of Nebraska. They married June 27, 1981 in Lincoln, NE. Kevin worked at the NE Department of Revenue for many years and as he moved for his wife’s career, held a variety of positions. He was a Certified Purchasing Manager. When they moved to Fergus Falls in 1993, Kevin worked for Fiskars-Power Sentry, Hintgen-Karst, Shoremaster, Galaxy Enterprises, and most recently, Nelson Auto. He would and did do anything for his daughters. For many years, he watched his girls dance with the Fergus Falls School of Dance and while doing so he videotaped the performances and provided copies to parents of other dancers. He was a volunteer for the Fergus Falls Volleyball Club and tech person at Grace United Methodist Church for many years. He loved going to the movies and adored animals, cherishing each of the many pets he had throughout his lifetime. Kevin took his biggest adventure 20 years ago, when he went canoeing and camping in the wilderness in the Canadian Bloodvein River area with his neighbor and friend, Ron Holstrom. Kevin is survived by his wife, Connie of Fergus Falls; daughters, Lauren (Andrew) Hanson of Fargo and their son, Oliver, and Marinn Knapp of West Fargo; his mother, Marjorie Knapp of Lincoln, NE; brothers, Robert Jr. (Roxanne) Knapp of Lincoln, NE and Steve (Janet) Knapp of Flower Mound, TX; sisters, Janice (Rodney) Caughron of Lincoln, NE, Karen (Thomas) Barrett of Lincoln, NE, and Robin (Rick) Stephens of Malcom, NE, as well as numerous aunts, uncles, nieces and nephews. Preceding him in death were his grandparents and his father, Robert Knapp Sr. An open house celebration of life will be held from 4:30 to 6 p.m. on Thursday, December 30, 2021 at Grace United Methodist Church in Fergus Falls, with a time of sharing at 5:30 p.m. Please wear Nebraska or red clothing. In lieu of flowers, memorials are preferred to the Otter Tail County Humane Society. Assistance provided by the Olson Funeral Home in Fergus Falls. Online condolences may be sent to www.olsonfuneralhome.com

Kevin Wayne Knapp, 64, of Fergus Falls, passed away at Essentia Health in Fargo, ND on Tuesday, December 21, 2021 surrounded by his family. Kevin was born in Lincoln, NE to Robert Sr. and Marjorie (Stiverson) Knapp on January 20, 1957. He... View Obituary & Service Information

The family of Kevin Knapp created this Life Tributes page to make it easy to share your memories.

Kevin Wayne Knapp, 64, of Fergus Falls, passed away at Essentia...