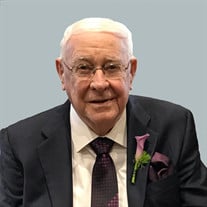 Louis Kermith Dybdal, (known as Kermith), 85, went to join his Lord and his wife on April 21, 2018. He passed away at Aurora Senior Living in Edina, MN. Kermith and Elaine had recently moved from the Fergus Falls/Dalton/Wendell area. He was born on July 15, 1932, to Melvin and Lila (Larson) Dybdal, on the family farm near Wendell. Kermith attended grade school at a Country School located on the NE corner of the Dybdal Farm. He graduated from Elbow Lake High School in 1950. Kermith farmed with his father until getting called to serve in the United States Army in Germany during the Korean War, from 1953-1955. He then attended the University of Minnesota in St. Paul, getting an Associate’s Degree in Agriculture. Kermith met the love of his life, Elaine Thunselle, and they were married on June 2, 1957, and were married for 60 years. They lived on what was known as the Grinder Farm until Melvin’s tragic death in a farm accident, after which they moved to the home farm. They were blessed with three children: Kevin Dybdal, Mark Dybdal, and Kathryn Mellon. Kermith was a life-long member of Trinity Lutheran Church. He was also a member of the Lions Club, Sons of Norway, Elbow Lake Co-op Oil Board, and 62 years with the American Legion. In the early 1970s, Kermith was recruited to take the County Executive Director position for the ASCS office in Elbow Lake. He retired from that position in 1993 and made many friends in the county. Kermith was a kind and caring person who enjoyed conversations and meeting with friends and family. He loved spending time at Ten Mile Lake where he and Elaine moved to in 2008. Preceding him in death were his parents, Melvin and Lila; wife, Elaine on 1/24/2018; and sister, LaDonna (Jim) Rivet. Survivors include his children, Kevin (Wendy) Dybdal, Mark (Shari) Dybdal, and Kathryn (Richard) Mellon; grandchildren, Kelsey (Dana) Brakke, Landon (Jordan) Dybdal, Kyle Dybdal, Kira (fiancé Mason Savage) Dybdal; sisters, Ruth (Gordy) LaValley & Helen (Loren) Knutson; as well as many nieces and nephews. Memorials are preferred to Trinity Lutheran Church in Wendell, MN. Visitation: 4:30-7 p.m. Thursday, April 26, 2018, with a 6:30 p.m. public prayer service, at Olson Funeral Home in Fergus Falls, MN, and resumes one hour prior to the service at the church Service: 1 p.m. Friday, April 27, 2018, at Trinity Lutheran Church, Wendell, MN Clergy: Reverend Eugene Boe Military Participation: Wendell American Legion Post 426 Interment: Trinity Cemetery, Wendell, MN Arrangements are provided by the Olson Funeral Home in Fergus Falls Online condolences may be sent to www.OlsonFuneralHome.com

Louis Kermith Dybdal, (known as Kermith), 85, went to join his Lord and his wife on April 21, 2018. He passed away at Aurora Senior Living in Edina, MN. Kermith and Elaine had recently moved from the Fergus Falls/Dalton/Wendell area. He was... View Obituary & Service Information

The family of Kermith Dybdal created this Life Tributes page to make it easy to share your memories.