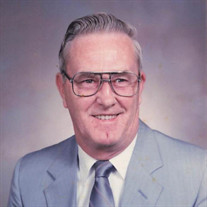 Kenneth Lyle Sillerud, passed away on Friday, May 8, 2020, at the age of 90 at PioneerCare in Fergus Falls. Kenneth was born December 21, 1929, in Prairie View Township, Wilkin County in Rothsay, MN, the seventh of eight children to Oliver and Clara (Pederson) Sillerud. Kenneth was baptized and confirmed at Little Bethany Church in rural Rothsay. He attended school at District 19 School of Prairie View Township, rural Rothsay through the eighth grade, after which he worked at his parents and cousin’s farms until he was drafted into the Army in February 1952. He attended basic training in Fort Leonard Wood, Missouri and served as Sargent with the 25th infantry division, 65th engineer battalion in Korea from August 1952 to September 1953 as a small engine engineer. He was awarded the United National Service medal, two overseas bars, and the Korean Service medal with three bronze stars. Kenneth was discharged from the Army on November 19, 1953. After returning from his military service, Kenneth worked on the farm of Bill Butenhoff from 1954 to 1955 and at that time Kenneth began attending classes at North Dakota State College of Science in Wahpeton, ND for electrical trades. After graduation Kenneth was hired by Otter Tail Power in Fergus Falls on May 13, 1957 as an Apprentice Journeyman where he worked his entire career, retiring as a Journeyman Technician on June 1, 1992. During his employment he had received many IDEA Service Awards. Kenneth made his home Fergus Falls and on February 14, 1959 at Bethlehem Lutheran Church was married to Jolaine (Johnson) Anderson. During their 19 years of marriage Kenneth and Jolaine continued to live in Fergus Falls and raise their family. He enjoyed fishing, hunting, bowling, tennis, softball, and gardening, along with strumming his guitar and spending special time with his children and their families. He was preceded in death by his parents, Oliver and Clara Sillerud; four brothers, Palmer, Glen, Carl, and Arlen Sillerud, and three sisters, Orpha Larson, Lorraine Brusven, and Ardis Halbakken. Kenneth is survived by four daughters, Denise (Philip) Nelson, Debra (Dean) Anderson, Dawn (Wayne) Schuett all of Fergus Falls, Minnesota, and Diane (DuWayne) Traut of Merrifield, Minnesota; two sons, Daniel Sillerud and David (Brandi) Sillerud both of Fergus Falls; eleven grandchildren, Alisha (Brian) Helgeson, Ashley Anderson, Justin Schuett, Kelsey (Cole) Helbling, Allison Anderson, Jesse (Stefany) Schuett, Danielle Schuett, Jordan Sillerud, Dillon Sillerud, Alicia (Jason) Mansur, and Rachelle (Jason) Johnson; six great-grandchildren, Edy, Abram, and Drew Helgeson, Sawyer Helbling, Emma Schuett, and Ava Mansur, along with his many nieces, nephews, and their families. Kenneth wished that all memorials be sent to Bethlehem Lutheran Cemetery or Foundation Fund. Arrangements are pending with the Olson Funeral Home in Fergus Falls. Online condolences may be sent to www.olsonfuneralhome.com

Kenneth Lyle Sillerud, passed away on Friday, May 8, 2020, at the age of 90 at PioneerCare in Fergus Falls. Kenneth was born December 21, 1929, in Prairie View Township, Wilkin County in Rothsay, MN, the seventh of eight children to Oliver... View Obituary & Service Information

The family of Kenneth Sillerud created this Life Tributes page to make it easy to share your memories.