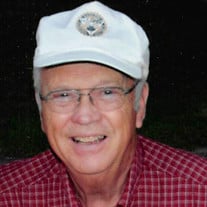 Kenneth Roger Rose, 87, passed away peacefully on October 3, 2018 surrounded by family. Ken was born on August 15, 1931 in Lanesboro, MN and raised on a farm in Highland, MN. After graduating from Lanesboro High School, he received his B.S. in Agriculture Economics from the University of Minnesota in 1954. He served in the U.S. Navy from 1951-1956 and later completed graduate work at the University of Minnesota and Colorado State University. Ken’s Christian faith was very important to him and he was baptized as an adult after moving to Pipestone, MN in 1957. There, he met his loving wife of 59 years, Marilyn (Pahl) while working as the County Extension Agent. In 1971, Ken, Marilyn and their four daughters moved to Fergus Falls, MN where he was the West Ottertail County Extension Director until his retirement in 1989. He was a longtime active member of the Kiwanis club, NARFE and First Lutheran Church. Ken wore many hats, literally and figuratively. After retirement, he kept busy volunteering as a Sunday school teacher, cemetery sexton and at the food shelf. He was a gardener, golfer, card player and a popcorn maker. He had wonderful friends he saw daily at coffee club. Ken was an outdoorsman and would often retell his memories of deer hunting in Wyoming, trout fishing in Canada and walleye fishing on Lake of the Woods. He was known for his kindness and sweet nature, and took a keen interest in getting to know people. His greatest joy was his family, especially his grandchildren and recently, great grandchildren. He is survived by his wife Marilyn; daughters, Cindy Western (Paul) of Minneapolis, Kathy Rose (Nick Baumann) of White Bear Lake, Janine Rose (Kraig Anderson) of Scandia, and Karen Rose of Fergus Falls; grandchildren, Jon, Lisa, Matt, Noah, Hannah, Jack, Sam, and Ben; and great grandchildren, Gracie, Avery, Jack, and Emma. Ken was preceded in death by his parents Alvin and Josie (Langord), siblings Donald, Glen, Phyllis, and great granddaughter Darla. Visitation: 5 to 7 p.m. Wednesday, October 10, 2018 at the funeral home and will resume one hour prior to the service at the church. Service: 2 p.m. Thursday, October 11, 2018 at First Lutheran Church, Fergus Falls, MN Clergy: Reverend Gretchen Enoch Military Participation: Fergus Falls V. F.W. Post 612 and American Legion Post 30 Interment: First Lutheran North Cemetery, Fergus Falls, MN Arrangements provided by Olson Funeral Home, Fergus Falls

Kenneth Roger Rose, 87, passed away peacefully on October 3, 2018 surrounded by family. Ken was born on August 15, 1931 in Lanesboro, MN and raised on a farm in Highland, MN. After graduating from Lanesboro High School, he received his B.S.... View Obituary & Service Information

The family of Kenneth R. Rose created this Life Tributes page to make it easy to share your memories.