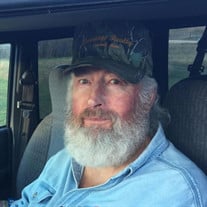 Keith Kenyon, 87, of Fergus Falls, died Saturday, September 25, 2021, at PioneerCare in Fergus Falls. Keith was born at home in Buse Township on October 22, 1933, to Maurice and Thelma (Buss) Kenyon. He grew up in Fergus Falls along with a brother and three sisters playing neighborhood softball, going to Saturday matinee movies, and ice skating on Lake Alice. As a child, Keith spent many happy days at his Grandma and Grandpa Thurneau’s farm. Keith graduated from Fergus Falls High School in 1952. As a young guy he enjoyed nice cars, honky-tonk music and hunting and fishing with family and friends. On September 3, 1955, Keith married Koleen Kenyon, and in 1956 he was drafted into the army and stationed in Germany until 1958. Keith and Koleen had seven children (one of whom passed away as an infant) in their 27 years of marriage. Keith helped install the railroad line from Fergus Falls to Fargo/Moorhead and was employed in metal work until he joined Otter Tail Power in 1963 and worked as an operator at the Hoot Lake plant. In 1968 he bought the old family farmstead in Friberg Township from his Grandpa Glen Kenyon, finished raising his family there, and made it his home for many years. Keith played guitar, harmonica and had an eye for photography, but more than anything else he loved being outdoors hunting, fishing and trapping. He was a captivating storyteller with a piercing gaze and a sly sense of humor. He loved a good family feast and was by far the slowest eater of all time! Just ask the grandkids and great-grandkids who impatiently waited for him to finish supper before opening their Christmas presents. Keith thoroughly enjoyed every minute of his 27-year retirement and felt grateful to have lived a full and fortunate life. A collector to the core, he loved to wheel and deal and he hit every auction sale on the map. In later years, he tended his potato patch faithfully and could be found dining with friends at the Viking Café on most days of the week. So long, Keith, Dad, Grandpa Keith… We’ll find you in a warm rain, the changing seasons, and birds on the wing. Preceding him in death are his parents, Maurice and Thelma Kenyon; sister, Ruth Carlquist; daughter-in-law, Denise (Severson) Kenyon; and infant daughter, Denise Kenyon. Keith is survived by his dear friend, Pam Gregory, his best hunting buddy, Brian Torgerson, his children, Dawn (Brad) Dugan of Fergus Falls, Steve Kenyon of Battle Lake, Leah Kenyon (Doug Moe) of Fergus Falls, Marty Kenyon of Erhard, Terri Kenyon (Bob Schmidt) of Fergus Falls and Kimberly Kenyon (Jim Lund) of Erhard; grandchildren, Jordan Kenyon, Jess (Jack Hegerle) Torgerson, Ash and Ian Landberg, Natasha (Nick) Grant, Tyler Kenyon-Woessner (Amanda Callahan), Debbie Kenyon-Woessner, Tully Kenyon (Roy Johnson) and Harris Kenyon; great-grandchildren, Sydney and Milan VanSurksum, Julian Kenyon-Spidahl, Avery, Izzybelle and Imogen Kenyon-Woessner; two sisters, Elaine Anderson of North Branch, and Pat (Ed) Hensch of Doran, one brother, Wayne (Alyce) Kenyon of North Branch; and many nieces, nephews, cousins and friends. Casual Celebration of Life: 3:00 PM – 5:00 PM on Saturday, October 2, 2021, at Roosevelt Park in Fergus Falls. Refreshments will be served. Funeral Home: Olson Funeral Home in Fergus Falls, MN. Online condolences may be sent to www.olsonfuneralhome.com

Keith Kenyon, 87, of Fergus Falls, died Saturday, September 25, 2021, at PioneerCare in Fergus Falls. Keith was born at home in Buse Township on October 22, 1933, to Maurice and Thelma (Buss) Kenyon. He grew up in Fergus Falls along with a... View Obituary & Service Information

The family of Keith Kenyon created this Life Tributes page to make it easy to share your memories.