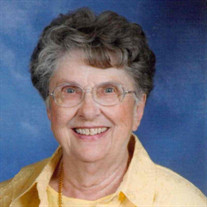 Kathryn Eidsmoe, 97, of Fergus Falls, MN died Sunday, May 16, 2021, at Pioneer Care. Kay was born December 12, 1923, in Lockhart, MN to Edward and Genevieve (Jane) Malakowsky. She attended school in Lockhart and graduated from high school in Ada. Kay graduated from Moorhead State Teacher’s College, with a two-year degree in elementary education. Several years later she completed her four-year degree at Valley City State College. She taught school for four years in Ada and met and married Orville Eng in 1948. They moved to Thief River Falls and had a daughter and two sons. Then they moved to Jamestown, ND and raised their three children and she taught at Anne Carlson school for special needs children. They moved to Fergus Falls where Orville died in 1981. She later married Myron Eidsmoe and joined him in Escondido, CA, until his death in 2015. She then moved to Fergus Falls and resided at Pioneer Care. She loved children and enjoyed teaching and had boundless love for her children, grandchildren, and great-grandchildren. She will be remembered for her kind, gentle, and positive spirit. Kay was preceded in death by her son, Fredrick; sister, Bette Haring, and brothers, Gerald and Dick. Kay is survived by her daughter, Melinda (Steve) Wienbar of Fergus Falls, granddaughters, Rebecca Wienbar of Minneapolis and Brianne (Jarred) Sampson of St. Paul, great-grandchildren, Owen and Reed; her son, John (Betty) and grandson, John of Georgia; stepson, Doug (Martina) and their daughter, Reaghan of California; stepson, Chris (Vicky) of Florida, and nephew and nieces. Visitation: One-hour prior to the service at the church Service: 11:00 a.m. Monday, May 24, 2021, at Federated Church in Fergus Falls. Interment: Knollwood Memorial Gardens, Fergus Falls, MN Clergy: Reverend Doctor Douglas Dent Arrangements are provided by the Olson Funeral Home in Fergus Falls. Online condolences may be sent to www.olsonfuneralhome.com

Kathryn Eidsmoe, 97, of Fergus Falls, MN died Sunday, May 16, 2021, at Pioneer Care. Kay was born December 12, 1923, in Lockhart, MN to Edward and Genevieve (Jane) Malakowsky. She attended school in Lockhart and graduated from high school in... View Obituary & Service Information

The family of Kathryn Eidsmoe created this Life Tributes page to make it easy to share your memories.