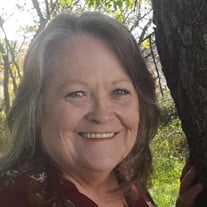 Kathleen Gerrie Moore, 68, of Fergus Falls, died Wednesday, April 28, 2021, at Lake Region Healthcare in Fergus Falls. Kathleen was born July 19, 1952, to Franklin and Mae (Hamilton) Moore in Mount Clemens, Michigan. She attended Port Hueneme High School, graduating in 1971. In 1974, she married Richard Wooton II in Oxnard, California. In 1975, the Lord honored Kathleen with the greatest honor of all, Motherhood. She worked in many different fields such as retail and data entry, but she was most passionate about her role as grandma and was thrilled to take care of her grandchildren whenever she could. She loved her grandchildren so much! Kathleen loved singing karaoke with her family and listening to her brother, Bruce and her two boys play their guitars. She loved to sew, write poems, shop for rare antiques, and go on spontaneous road trips with her grandchildren. Preceding her in death were her parents. She is survived by her children, Richard Jerry (Michelle) Wooton of Fergus Falls, James Michael (Elizabeth) Wooton of Fergus Falls and Lesley Irene Wooton-Bezecny of Rogue River, Oregon; their father, Richard Leslie Wooton II; grandchildren, Brendan, Abigail, Alexis and Madison Wooton, Nathaniel Bezecny, and Maximillian and Dominic Gilliver; sister, Judy Christiansen of Oregon; brother, Bruce Moore of Oregon; brother-in-law, Craig (Kaori) Wooton and their children, Cory and Nicole of Japan; brother-in-law, Tony (Sandra) Wooton of California; sister-in-law, Paula (Brad) Johnson-Wooton and their son, Tylor Johnson of Fergus Falls. Celebration of Life: 6:00 p.m. to 9:00 p.m. Tuesday, May 4, 2021, at James and Elizabeth Wooton’s home 25789 County Highway 88 Fergus Falls, MN 56537. Arrangements are provided by the Olson Funeral Home in Fergus Falls. Online condolences may be sent to www.olsonfuneralhome.com

The family of Kathleen Moore created this Life Tributes page to make it easy to share your memories.