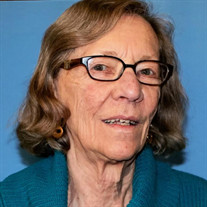 Karen Joan Johnson, 85, died early in the morning of Friday, November 20, 2020. She was born on December 18, 1934 in Littlefork, MN to Roy and Norma (Anderson) Haugen. As a young child her family moved frequently and she often found herself finishing a school year in a different district than where the term began. She graduated high school in Fergus Falls, MN. Following high school, she was hired by Oats LeGrand to lifeguard at Pebble Beach where she was the sole guard for the summer. She attended St. Cloud State and later worked and lived in the Twin Cities. She married Ralph “Red” Johnson on August 24, 1963. They were married for 34 years, initially living in the Twin Cities before moving to a home on Kabekona Lake near Laporte, MN. In 1968 they moved back to Fergus Falls. Along the way they welcomed four children, Linda, Amy, Don and Mark. In 1979, she and her husband designed and built their log home in rural Dane Prairie township. Ralph died suddenly in 1998 and Karen moved back into Fergus Falls. Her final address was Mill Street Residence, where she resided since 2014. Karen and her husband were foster parents to numerous children over the years - staying in contact with several. She was involved with the Federated Church and volunteered with groups including the Red Cross, Prairie Wetlands and as a volunteer grandparent - listening to young children practice reading. Over the years she had worked part time at the Victor Lundeen Company. In her final professional role, she served as Guardian ad Litem for the 7th Judicial District from 1994 until 2008 - having stayed in the role to see the last of “her kids” through the system before retiring. Having moved often as a child, she was never nostalgic for homes or places - but found great friendships in her circle of people: her knitting group, the Morning Glories donut group, the Prairie Wetland crew, the team at Lundeen’s and friends she’d meet while refinishing furniture in classes at the FFHS Vocational center. She took great joy in her grandchildren and attended as many of their events as possible. She always had a fresh supply of tootsie rolls stashed in her purse for them. Karen will be remembered for her kindness and generosity. Preceding her in death were her parents, husband Ralph, brother Andie Haugen and his wife Kathy of Bemidji. Survivors include two daughters, Linda (Chuck) MacFarlane of Fergus Falls and Amy (Steve) Lucas of Fond du Lac, WI; two sons, Don of St. Paul and Mark of Fergus Falls; five grandchildren, Dakotah and Skylar Lucas, Andrew and Abigail MacFarlane and Tyler Bohndorf; one great-grandchild, Raelynn Bohndorf; and sister, Linda (Jon) Blessing of Bemidji, several nieces and nephews, and many wonderful friends. Memorials are preferred to the Fergus Falls Humane Society or Lakeland Hospice. Arrangements are pending with the Olson Funeral Home in Fergus Falls. Online condolences may be sent to www.olsonfuneralhome.com

Karen Joan Johnson, 85, died early in the morning of Friday, November 20, 2020. She was born on December 18, 1934 in Littlefork, MN to Roy and Norma (Anderson) Haugen. As a young child her family moved frequently and she often found herself... View Obituary & Service Information

The family of Karen J. Johnson created this Life Tributes page to make it easy to share your memories.

Karen Joan Johnson, 85, died early in the morning of Friday,...