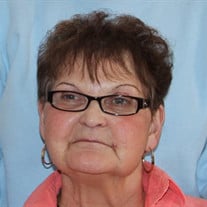 Judy Annette Wiese, 76, died Wednesday, August 15, 2018, at her daughter&#8217;s home under the care of hospice. She was born February 21, 1942, in Fergus Falls, Minnesota, the daughter of Erwin and Lila (Nelson) Field. She was baptized... View Obituary & Service Information

The family of Judy A. Wiese created this Life Tributes page to make it easy to share your memories.