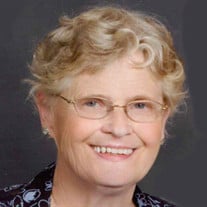 Judith Ann (Sicard) Wilhelmy, 80, of Fergus Falls passed away unexpectedly on Tuesday, October 8, 2019, as a result of an automobile accident near Hewitt. Judith was born January 14, 1939, in Minneapolis to Roger and Frances (Lindberg) Sicard. At the age of six her family moved to Duluth, she attended high school at Derham Hall. At the age of 19 she moved to St. Paul where she met James “Max”. On April 4, 1959, she married Max at Presentation Church in St. Paul where they resided until 1975. She completed her Bachelor’s Degree at UMD in 1979, with a degree in Sociology. From 1985 to 1999 they lived in Elk River, where she worked, along with her husband at “3 R’s” Counseling Center in N.E. Minneapolis. They also lived in Zimmerman, MN before coming to Fergus Falls in 2001. Judy enjoyed helping others and loved volunteering at Habitat for Humanity, the museum, the Food Shelf, and Our Lady of Victory Church. She was preceded in death by her parents, Roger and Frances Sicard and a brother, Gerald Sicard. She is survived by her husband, James “Max” Wilhelmy of Fergus Falls; two sons, Joseph (Grace) Wilhelmy of Fergus Falls and Thomas (Terri Colvin) Wilhelmy of Potlach, ID; a daughter, Lynne (Jimi) Thomson of Rapid City, SD; a sister, Joan (John) Gilbert of Duluth; grandchildren, Olivia, Crystal, Alexander, Elizabeth, Jessica, Sara, and Katrina; great-grandchildren, Arrianna, Sernity, Kaleb, Caidon, Edlia, Gracie, Tucker, Baylie, and Addyson; nieces, Lauren, Kate, and Kelly; nephews, Jeff, Jack, and Patrick, and many other relatives. Visitation: Monday, October 14, 2019 from 5:00 – 7:00 p.m. with a prayer service at 6:30 at Olson Funeral Home in Fergus Falls Service: Tuesday, October 15, 2019 at 11:00 a.m. at Our Lady of Victory Catholic Church in Fergus Falls Clergy: Father Alan Wielinski Interment: St. Otto’s Cemetery Fergus Falls Arrangements are provided by the Olson Funeral Home of Fergus Falls. Online condolences may be sent to www.olsonfuneralhome.com

Judith Ann (Sicard) Wilhelmy, 80, of Fergus Falls passed away unexpectedly on Tuesday, October 8, 2019, as a result of an automobile accident near Hewitt. Judith was born January 14, 1939, in Minneapolis to Roger and Frances (Lindberg) Sicard.... View Obituary & Service Information

The family of Judith Ann Wilhelmy created this Life Tributes page to make it easy to share your memories.