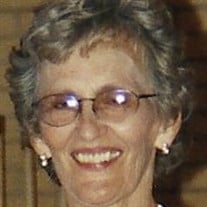 Judith Kowalski Hensch, 84 of Campbell, MN passed away June 22, 2019 at Sanford Health in Fargo, ND. Judy was born to Agnes (Hanson) and Julius Thompson in Otter Tail County at her grandparents’ home on January 24, 1935. She was from a large family of 11 children. While growing up, her family moved often to different farms in Otter Tail County. She attended numerous schools: rural, Battle Lake, and finally Fergus Falls where she graduated from high school. She started teaching in 1956 and attended off-campus courses from Moorhead State College. Judy taught in rural schools for ten years, then worked at the Regional Treatment Center as a Special Program Assistant for 28 years, 12 of those in the Speech Department. In 1959, she married Wallace Kowalski and moved to a farm near Erhard where during the summers she raised chickens, learned how to stack bales of hay, and sold eggs; she loved being on the farm. Judy and Wally raised a daughter, Karen, and two sons, Gene and Mark, while Judy continued to teach and work at the Regional Treatment Center. Judy loved gardening and always had a large garden which she used to make pickles and frozen vegetables for the winter. She also canned jams and jellies, and gave from the garden to her church fall bazaar. Judy taught Sunday school and confirmation, sang in the choir, and was a women’s leader for many years in her church. She loved quilting - giving many away to kids, grandkids, the Salvation Army, and Someplace Safe. She was an avid reader and crossword puzzles were her passion. She did counted-cross stitching – again, giving many projects away. After a two-year illness, her first husband Wally passed away in 1998. She lived on the farm until 2003 when she married Frank Hensch and moved to Campbell. While living in Campbell, she was a member of the Lions Club and the Breckenridge Red Hats. Of all she did in life, her greatest joy was being a wife and mother, teaching rural school and Sunday school. Judy was preceded in death by her parents; first husband, Wallace and brother, Eugene Thompson. She is survived by her husband, Frank; daughter, Karen (Steve) Harris; sons, Gene (Jennifer) Kowalski, and Mark (Kim) Kowalski; four grandchildren, Carter and Mitchell Kowalski, and Kristen and Samuel Kowalski; siblings, Richard (Ruth) Thompson, Margret Leidal, Robert (Joanne) Thompson, Joan (Larry) Steeves, Jerome Thompson, Lynn Leegard, MaryAnn (Tom) Berryman, Marcia Barrett, and Jeffery (Bonnie) Thompson; sister-in-law, Adeline Hansen; step-children, Durlin (Barb) Hensch, Darlene (John) Lime, Errow (Jill) Hensch, Coral (Ron) Verhaagen; many step grandchildren, great grandchildren, and numerous nieces and nephews. Visitation: 4-7 p.m. Tuesday, July 2, 2019 at Olson Funeral Home and resuming one hour prior to service at the church. Service: 10:30 a.m. Wednesday, July 3, 2019 at Living Faith Church, Fergus Falls Clergy: Reverend John Kilde Interment: First United Church of Christ Cemetery, Fergus Falls Arrangements are provided by the Olson Funeral Home, Fergus Falls Online condolences may be left at www.OlsonFuneralHome.com

Judith Kowalski Hensch, 84 of Campbell, MN passed away June 22, 2019 at Sanford Health in Fargo, ND. Judy was born to Agnes (Hanson) and Julius Thompson in Otter Tail County at her grandparents&#8217; home on January 24, 1935. She was from... View Obituary & Service Information

The family of Judith A Hensch created this Life Tributes page to make it easy to share your memories.