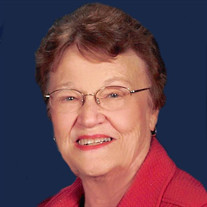 Joyce Lorraine (Western) Johnson, died Sunday, June 2, 2019, at PioneerCare, Fergus Falls. The daughter of Clarence and Clara Western of Ashby, Joyce was born in Fergus Falls, on May 26, 1927, and spent her childhood years in Ashby. She was baptized and confirmed at Pelican Lake Lutheran Church and graduated from Ashby High School. Following her graduation, she attended Concordia College in Moorhead, where she pursued a course in business. In 1947, she was hired by Otter Tail Power Company to work in the Company’s merchandising department in Fergus Falls. On August 21, 1949, she married Ralph Johnson of Fergus Falls, a marriage that lasted nearly seven decades and was blessed with the births of three sons. With the advent of motherhood Joyce resigned her position with Otter Tail Power to become a full-time mom. As such, she was able to lavish her love on and care for the needs of her growing family. During her adult years, Joyce was active in the work of Bethlehem Lutheran church, serving as librarian, on the Altar Guild, as a member of various Bible study groups and as a willing worker in the many projects of the women of the church. Some of Joyce’s other interests included volunteer work at A Center for the Arts and her longtime membership in Chapter Du of the PEO Sisterhood. Joyce belonged to several bridge clubs and enjoyed both the card play and the socialbility that went with it. Another of her interests was travel. She and her husband were fortunate to have traveled extensively over the years, both in the United States and abroad. Joyce was a very thoughtful caring person. She often made candy or cookies and distributed them to friends, ill persons, shut-ins and neighbors. She was usually the first to bring food and her condolences to grieving families gathering for funerals. She had an excellent feeling for people. Preceding her in death were her parents, Clarence and Clara. Survivors include her husband, Ralph of Fergus Falls; sons, Michael of Fergus Falls, Steven (Roz) of Plymouth and Robert (Margo) of Moorhead; three grandchildren, Adam (Rachael), Tyler (Nathalie) and Brady (Mia); and three great-grandchildren Celia, Wells and Tori. Visitation: one hour prior to the funeral at the church Service: 1:00 p.m. Thursday, June 6, 2019, at Bethlehem Lutheran Church, Fergus Falls Clergy: Reverend Tom Peterson Interment: Bethlehem Cemetery, Fergus Falls Arrangements provided by Olson Funeral Home, Fergus Fall online condolences may be sent to www.olsonfuneralhome.com

Joyce Lorraine (Western) Johnson, died Sunday, June 2, 2019, at PioneerCare, Fergus Falls. The daughter of Clarence and Clara Western of Ashby, Joyce was born in Fergus Falls, on May 26, 1927, and spent her childhood years in Ashby. She was... View Obituary & Service Information

The family of Joyce Lorraine Johnson created this Life Tributes page to make it easy to share your memories.